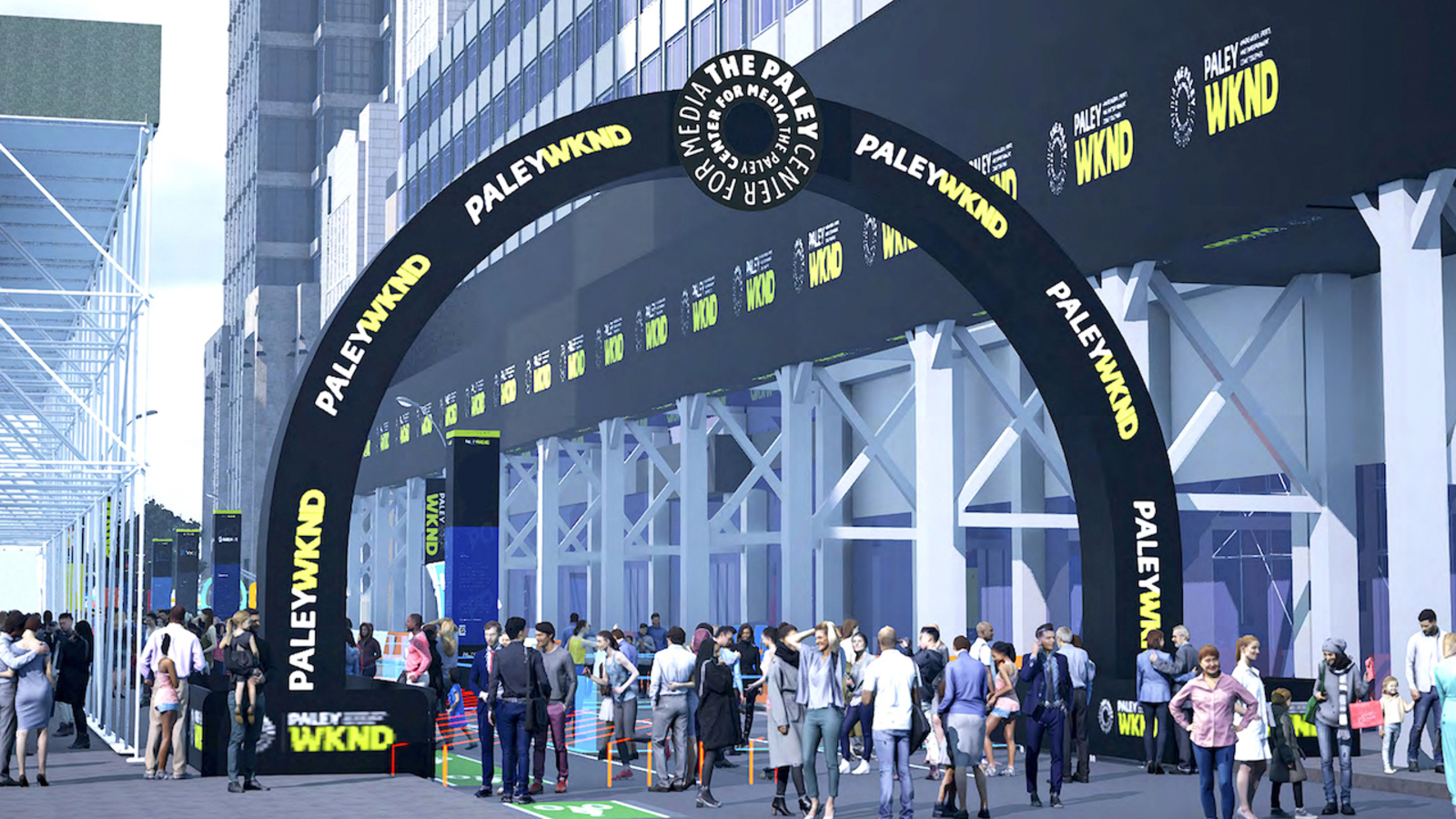 The Paley Center is celebrating everything in the world of media, sports, gaming, and entertainment this weekend.

“PaleyWKND is the ultimate media, sports, gaming, and entertainment festival offering once-in-a-lifetime, memorable experiences for little kids, big kids and kids at heart,” said Maureen Reidy, President & CEO of The Paley Center for Media. “A tribute to New York and the first-of-its-kind celebration of all things media and entertainment, PaleyWKND is sure to take its place as a can’t-miss, must-attend event this fall.”

The event at The Paley Museum and its entire 52nd Street block between 5th and 6th Avenues includes interactive exhibits with the Metaverse and professional sports, and for the first time ever, sports fans can check out championship trophies from the NFL, NHL, NBA, and Major League Baseball all in one place.

It’s a collaboration of The Paley Center, over two dozen world class companies and iconic media brands, and strongly supported by the City of New York.

The event will bring an incredible array of interactive experiences and immersive attractions from the exciting worlds of media, sports, gaming, and entertainment.

The festival is a tribute to New York City and celebrates the return to in-person programming, production, and events as the nation and the world emerge from this once-in-a-century pandemic.

The Paley Center for Media promises it’ll be a once-in-a-lifetime, New York-sized event.

The event is free to the public; guests can walk up to enter or reserve their tickets for timed entry at www.PaleyWKND.org.

PaleyWKND is open to the public through Sunday, October 2.

The Initial Lineup of Programs and Experiences Currently Includes:

For the first time ever as part of a public exhibit, all four major professional sports league championship trophies will be on display inside the Museum for special photo opportunities:

Do you have what it takes to be a future NFL player? Find out at PaleyWKND as the NFL brings the NFL experience to 52nd Street! Join in skills and drills on a mini turfed field, take a photo of The Vince Lombardi Trophy and view the full collection of all 56 Super Bowl Rings up close!

The Stanley Cup to be Displayed at The Paley Center

The National Hockey League will display the prestigious Stanley Cup at the Spielberg Gallery as part of a special one-of-a-kind exhibition. Get your photos taken with your favorite trophy.

Preview the metaverse and take a trip to where the physical and virtual worlds collide at PaleyWKND! Meta Immersive Learning (MIL) will take you on an immersive journey featuring mind-blowing AR (Augmented Reality) & VR (Virtual Reality) experiences which take you from the streets of New York to the vast expanse of the universe!

Nickelodeon brings its signature Slime and beloved shows to an interactive fan experience for kids and families! From photo ops that take fans into Nickelodeon’s beloved preschool series, including Blue’s Clues & You!, and Santiago of the Seas, to one-of-a-kind experiences that immerse fans in the worlds of hit shows such as That Girl Lay Lay, Tyler Perry’s Young Dylan, and NFL Slimetime, to bestowing Nickelodeon’s greatest honor of getting Slimed…kids will have the Slime of their life at this truly interactive exhibit.

Fremantle – “The Price is Right”

Come on down! as Fremantle brings “The Price Is Right” to PaleyWKND! Fremantle celebrates the 50th Anniversary of the iconic “THE PRICE IS RIGHT” by bringing a celebration of television’s longest running game show to PaleyWKND. Fans can play the games, spin the Big Wheel and more on the Come On Down Tour bus.

Put your MLB baseball athleticism to the test! Show off your swing and fielding skills! Kids and fans will get to PLAY BALL in special MLB batting and fielding cages. Along with giveaways, MLB guests and talent will be on hand for surprise appearances and meet-and-greets.

Play it at PaleyWKND – fans get hands-on time with Nintendo Switch Sports and Splatoon 3! Nintendo will have a gaming tent where fans can enjoy some of its recent games and view game trailers.

Kids can play with Hasbro’s most popular games and toys including oversized versions of Operation and Connect 4 games, and a giant Nerf blaster zone where people of all ages can get active and unleash the play with NERF blasters.

The NBA and WNBA Bring Basketball to 52nd Street

Get your hoop on courtesy of the NBA and WNBA at PaleyWKND! Two basketball courts right on 52nd street will immerse kids and families in the fun of honing their dribbling, passing and shooting skills alongside members of the NBA family during Jr. NBA Basketball Clinics!

Be among the very first audiences to experience episodes from the second half of Season1 of Mattel’s Barbie: It Takes Two, on the Big Screen at PaleyWKND! Join Malibu & Brooklyn on fun-filled adventures that take them from the beach to the big city! And while you’re here, enter the world of American Girl! Bring your favorite American Girl doll to the party and enjoy exclusive, character-themed D.I.Y. crafting experiences, American Girl prize giveaways, and more!

NASCAR and NBC SPORTS bring high-speed thrills to PaleyWKND! Get an up close and personal look at NASCAR’s latest mind-boggling innovation, the Next Gen car. See the Bill France Cup, the legendary trophy awarded to each year’s NASCAR Cup Series champion, and if you’re feeling like a race car driver yourself, you can get behind the wheel and take to the track in one of NASCAR’s virtual iRacing simulators!

NHL Stanley Cup to be Displayed at The Paley Center

The National Hockey League will display the prestigious Stanley Cup at the Spielberg Gallery as part of a special one-of-a-kind exhibition. Get your photos taken with your favorite trophy.

The worldwide TV phenomenon The Masked Singer comes to PaleyWKND in all its sequined, spangled, razzle-dazzle glory! Join favorite characters from FOX’s #1 series including “The Sun” in exploring the show’s most iconic looks with fun photo-ops and more!

Celebrate the Power of Sports with ESPN! Fans can join in the fun with inclusive interactive sports activities and create fun social media images for immediate digital sharing with your friends.

Xbox joins PaleyWKND for Saturday and Sunday with games and giveaways!

Home to many of the most iconic brands, franchises and characters in the history of entertainment, Warner Bros. Discovery will be screening their latest and most anticipated titles at PaleyWKND.

Watch Bloomberg TV & Radio in action at a custom pop-up news studio! Try your skills at anchoring your own newscast! Attendees can learn how to make a newscast and radio broadcast at Bloomberg’s custom News & Radio desk.

For Hispanic Heritage Month, watch one of the brilliant Super Series that Telemundo has brought to screens around the world. Get an intimate look at some glamorous fashion from behind the scenes and celebrate shows that have captured the hearts and minds of millions of viewers.

See how the World Surf League is progressing the sport of competitive surfing at PaleyWKND! Experience all the moments from the world’s best surfers and the world’s best waves as they blaze a new era of surfing.

AMC/AMC+’s mold breaking, genre defying, and premier storytelling hits the big screen at PaleyWKND with preview screenings of some of their most popular series and anticipated shows!

Altice/Optimum a brand of Altice USA

Events and participants subject to change.

About The Paley Center for Media

The Paley Center for Media is a 501(c)(3) nonprofit organization that has proudly made its home in NYC for over 45 years and operates the iconic Paley Museum. Through its respected programming, The Paley Center leads the discussion about the cultural, creative, and social significance of media, drawing upon its curatorial expertise, an international collection, and close relationships with the media community. The general public can participate in Paley programs in both New York and Los Angeles that explore and celebrate the creativity, the innovations, the talent and the leaders who are shaping media. The public can also access the Paley Center’s permanent media collection, The Paley Archive, often referred to as a national treasure, containing over 160,000 television and radio programs and advertisements. Through the global programs of its Media Council and International Council, the Paley Center also serves as a neutral setting where media professionals can engage in discussion and debate about the evolving media landscape. Previously known as The Museum of Television & Radio, The Paley Center was founded in 1975 by William S. Paley, a pioneering innovator in the industry.