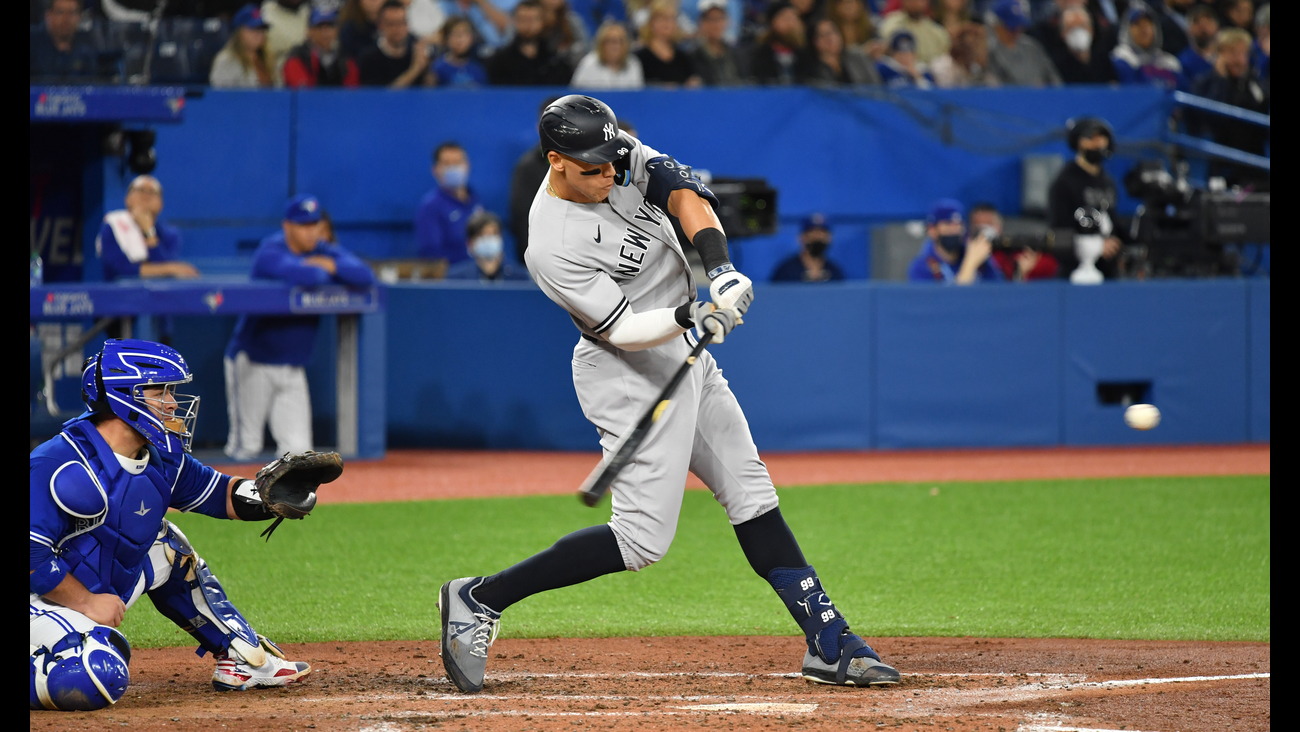 A man in a Toronto Blue Jays cap picked up Aaron Judge’s home run ball and briefly held his arms aloft in celebration.

But then he made a move that quickly went viral on social media Tuesday night.

The man handed the ball over to a young boy in a New York Yankees cap and Judge T-shirt one row behind.

Overcome with emotion, the boy started crying and gave the man a hug.

The baseball world could not stop watching the video of the Blue Jays fan’s act of kindness and the overwhelming joy on the young Yankees fan’s face.

“What it’s all about,” the Yankees tweeted.

What it’s all about 💙 pic.twitter.com/LGt2zkty5J

“That’s what’s special about this game, man,” Judge said when told about the exchange. “It doesn’t matter what jersey you wear, everybody is a fan, everybody appreciates this game. That’s pretty cool. I’ve got to check out that video. That’s special.”

The big blast from Judge put the surging Yankees on the path to yet another win.

Judge homered and drove in three runs, Jameson Taillon allowed one run in six innings, and the Yankees extended their streak to 11 games by beating the Toronto Blue Jays 9-1 on Tuesday night.

Giancarlo Stanton hit a two-run home run in the ninth, his fifth of the season. New York leads the MLB with 34 home runs this season, including 23 in the past 11 games.

“Everything is clicking,” Stanton said. “Timely hitting, the pitching has been great. We’ve just got to keep it going.”

Judge’s game-tying solo homer in the sixth inning was his ninth of the season, pulling him even with teammate Anthony Rizzo for the big-league lead.

“It definitely pumped some life into us,” manager Aaron Boone said of Judge’s 427-foot shot into the second deck.

Judge has 13 RBIs in his past five games, adding a two-run double in New York’s six-run seventh inning.

Taillon (2-1) allowed five hits, walked none, and struck out four to win his second straight decision.

Josh Donaldson and Marwin Gonzalez each had RBI doubles and Aaron Hicks reached base four times as the Yankees improved to 18-6. It’s the seventh time in franchise history that New York has won 18 of its first 24 games.

New York’s winning streak also is the longest in the majors this season (the Yankees won 13 straight games from Aug. 14 to 27 last year).

Toronto, meanwhile, snapped a streak of 32 games without consecutive losses, dating back to Sept. 24, 2021. The Blue Jays also lost a series for the first time this season.

Toronto went 1 for 11 with runners in scoring position and left seven on base.

“We’re cold, but we’re going to get it going at some point,” manager Charlie Montoyo said.

One of New York’s runs in the seventh came when home plate umpire Ron Kulpa ruled Gonzalez had evaded a tag from Toronto first baseman Vladimir Guerrero Jr. in a rundown between third and home. Replays appeared to show Guerrero did tag Gonzalez, but Toronto had already lost its challenge earlier in the inning.

Boone said he presumed Gonzalez would be out, and was watching the other runners to see if they could advance.

“I just saw him twisting and turning,” Boone said of Gonzalez. “Next thing I know, he’s shaking our hands.”

Hicks got a one-out single in the sixth, but was thrown out trying to steal second with Judge at the plate. Two pitches later, Judge hit his game-tying home run.

“That was a huge homer,” Taillon said. “He got all of that one. It definitely lifted everyone up a little bit.”

Adam Cimber (4-1) replaced Manoah in the sixth and gave up RBI doubles to Donaldson and Gonzalez.

Julian Merryweather replaced Cimber but didn’t retire any of the four batters he faced. After Gonzalez scored on Jose Trevino’s fielder’s choice, Hicks hit an RBI single and Judge followed with a two-run double.