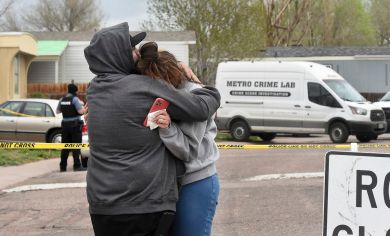 Rock and roll wannabe James Decker, in a prescient 2008 video, sang a sad song of his own demise.

The 50-year-old musician’s failed pursuit of fame and fortune ended with two gunshots to the head in Coney Island this past November, with cops finally arresting an ex-con with a long rap sheet last week for murder and possession of a loaded gun.

Decker’s brother Joseph, 52, was upset but hardly surprised by word of his drug-addicted sibling’s death — until learning the violent details of the Nov. 21 murder as James sat on a shoreline bench in Brooklyn’s Coney Island Creek Park shortly after 8 a.m.

James Decker embraced the rock and roll lifestyle, but never managed to achieve the success of New York icons like Rock and Roll Hall of Famers Lou Reed or Joey Ramone, according to his brother.

“He lived that New York rocker life,” said Joseph Decker. “He dated legitimate supermodels. His life was pretty good. He was down with famous people in that scene … I think he fell more in love with the drug side of being a rock star and the failure was expected.

“It was his nature of self-sabotage.”

Decker, who was living in Coney Island with two people, was busted for a second time last year on drug possession charges. Despite his addiction, Decker stayed in touch with his family and was planning to join them for Thanksgiving dinner just five days after his death.

“My father wanted to have a little Thanksgiving, and wires him money, and he finds out the next day his son was murdered,” his brother said. “The pain is going to be what it is.”

Accused killer suspect George Morales, a four-time ex-con, lived just a short walk from the park where he pulled the trigger, police said. His latest arrest in a long litany of law-breaking led to a two-year prison stint for gun possession.

A surveillance video captured the pair arguing inside a nearby deli before the fatal gunshots flew, and cops recovered an unspecified amount of heroin on the victim.

While details were murky about the killer’s motive, Joseph Decker said his doomed sibling was texting with with a third brother about the supposed beating of a pit bull in the adjoining apartment.

“If it ends with him defending a dog, it’s going to be golden for his final chapter,” said Joseph Decker. “But we just don’t know why he was killed. He was a musician and a lifelong New Yorker. He was a cool guy. He was just an old-school New York guy.”

“For my brother to get shot in the head on a bench in New York City, after so many chapters of his life, it was kind of New York City poetic,” he said.