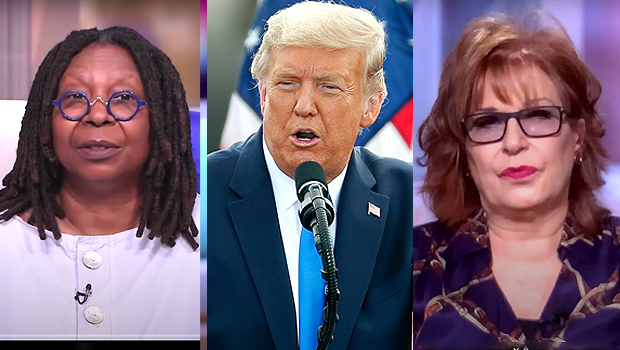 Something is rotten, say the ladies at “The View.”

While discussing the White House’s push for herd immunity to quell the pandemic, against advisement from Dr. Anthony Fauci, Goldberg shared her theory.

Behar chimed in from her virtual set, “Me too!”

“I’m starting to feel like, really? Wait a minute, five days. You’re the only person on the face of the Earth … and if you’re comparing yourself to Jesus, you’re saying five days, that’s all it took,” she incredulously wondered. “People still haven’t been able to get out of the bed. So I don’t know. I just feel weird about it.”

Behar, who is no fan of the caustic commander-in-chief, said she was “kind of agreeing with” Goldberg, while co-host Sunny Hostin said Trump possibly beat it so quickly because others “don’t have access to the same drugs.”

“It’s not about the drugs,” Behar shot back. “He’s a liar. How can you believe anything he says?”

Goldberg added that, “because it’s hard to trust him, it’s also hard to go with it and I hate feeling like that.”

More than 218,000 people in America have succumbed to the novel coronavirus since March.

On Oct. 2, Trump announced that he had tested positive for the virus — months after downplaying the disease in public, while privately telling author Bob Woodward it was “deadly” in February.

After his fever spiked and oxygen levels dropped, the president was airlifted to Walter Reed National Military Medical Center, where he spent three days before returning to the White House.

Trump was reportedly prescribed a number of medications following his diagnosis, including an experimental antibody from Regeneron and a dose of remdesivir, which is an antiviral drug initially developed to treat Ebola.

In the days following, the president has made several public appearances, and has traveled to campaign rallies in other states.

First Lady Melania Trump, who also allegedly tested positive for the disease, revealed earlier this week that the couple’s 14-year-old son Barron has the disease but is showing “no symptoms”

Earlier in “The View” conversation, Hostin expressed her disappointment in Trump for bringing up his son while pushing for schools to reopen across the country.

“What we do know now about young people is that they could be superspreaders, some of them to have symptoms and die from it,” Hostin said. “While they may be asymptomatic, they come home to multi-generational households and then they infect their parents and their grandparents and those people don’t have access to the type of treatment that Donald Trump had, which was $100,000 worth of experimental drugs, treatment that isn’t available to the everyday person.”

Calling Trump’s rhetoric and his administration’s policy “reckless,” the show’s resident legal expert added: “Most parents want to protect their children from this deadly virus, rather than bring the virus into their homes, infect their children and then brag about it. That was one of the most disappointing things I’ve heard from the White House.”

“Somebody should tell the father of the year, Donald Trump, some children have lifelong complications,” Behar said.

In July, the Fact Checker database tabulated that Trump has made over 20,0000 false or misleading claims since serving as president.