‘We give thanks for the gift of animals’: Annual Blessing of the Pets delights Manhattan humans 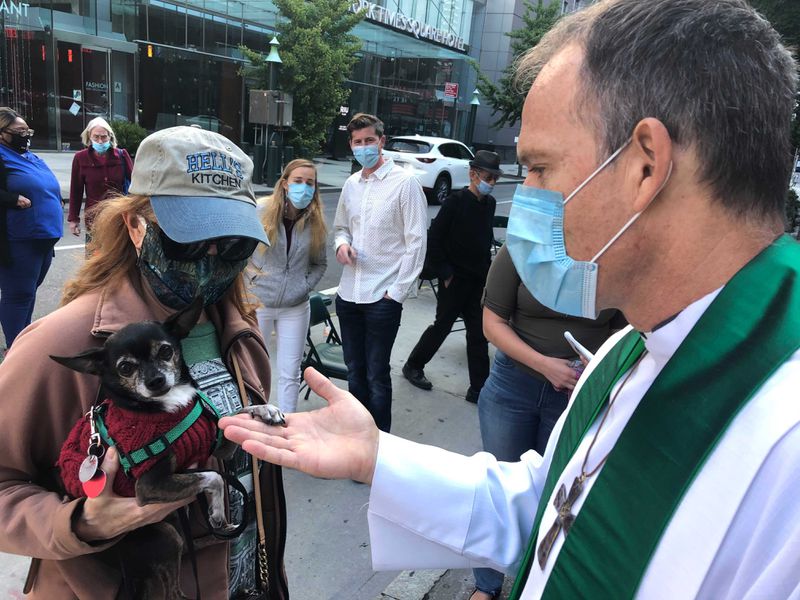 One of Hell’s Kitchen’s most heavenly traditions, the annual Blessing of the Pets, delivered benedictions and excited barks from a couple dozen very good boys and girls on Sunday.

“This is a miracle!” a woman exclaimed, as residents brought their beloved pets to St. Luke’s Lutheran Church on 46th St. for the yearly ceremony.

“We give thanks for the gift of animals, these wonderful members of our community who enrich our lives,” said Pastor Arden Strasser, before leading the crowd in singing “All Things Bright and Beautiful” at the outdoor ceremony.

The service and blessing fell on the Feast of St. Francis Assisi, the patron saint of animals, and World Animal Day, which began in 1925 as a day of action for animal welfare and rights.

Debbie Heard, 60, brought Max, her 10-year-old Jack Russell and Georgie, 5, her friend’s terrier mix to the ceremony. And Heard, who lives in the neighborhood, encouraged other dog owners from the park at Pier 84 to come along with their pets.[More New York] Woman dead, two men critically hurt in Queens plane crash »

“I’ve been coming for the last couple of years now,” said the retired respiratory therapist. “There was one time they had the blessing inside the church.”

Gesturing toward Max with affection, she said, “That one barked through the whole service. It was awesome.”

Found in California, the pup seems to have already been blessed. He was adopted about two years ago by Rossetter, who estimated his age as six.

Tassie, a Bichon and Miniature Schnauzer mix, was next. She reached her paws out to Strasser.

“Lord I’m praying for Tassie today, another one of your creations,” he prayed as Tassie’s human, musician Nissa Kahle, 33, beamed.

“Please bring the spirit of obedience and listening, so she doesn’t cause trouble, and may she always bring love to the owner.”