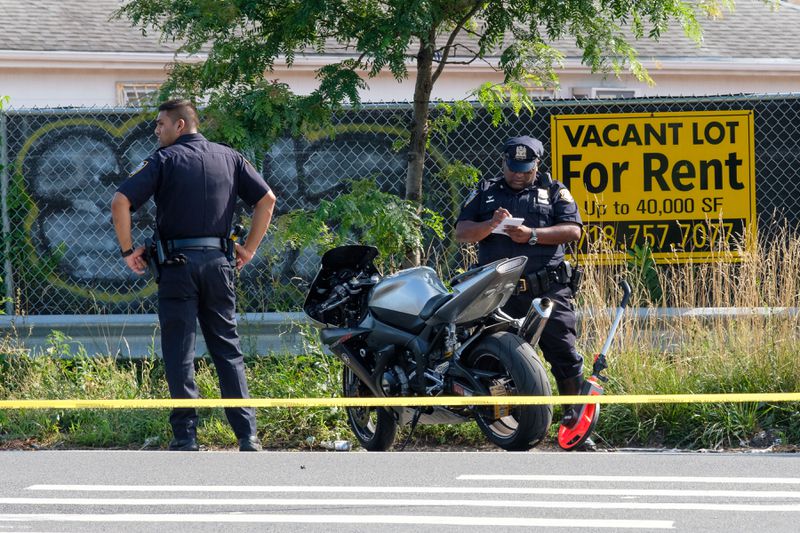 Two motorcyclists died in separate crashes in Brooklyn, bringing to three the number who died in the borough in a 48-hour span, police said Tuesday.

In the first of the crashes, Jordan Smith, 26, was riding his Kawasaki ZX6 south on Louisiana Ave. in Starrett City when he crashed about 2:10 a.m. Sunday, cops said. He slammed into a 2006 Nissan Pathfinder pulling out from the curb to make a U-turn near Twin Pines Drive.

Smith, who lived in North Brunswick, N.J., was taken to Brookdale University Medical Center, where he died.

The 46-year-old man driving the Pathfinder was not injured and no charges were immediately filed.

The 26-year-old driver of the Honda remained at the scene. No charges were filed. (Gardiner Anderson)

The next day, Jan Shah, 23, was riding a 2002 Yamaha motorcycle down Conduit Blvd. in East New York when he blew through a steady red light and struck a 2020 Honda Sedan heading west on Sutter Ave. about 1:20 p.m. Monday.

Shah was thrown from his bike and suffered a head injury. Medics rushed him to Brookdale University Hospital, where he died a short time after the 1:20 p.m. crash. He lived in the Arverne neighborhood of the Rockaways in Queens.

The 26-year-old driver of the Honda remained at the scene. No charges were filed.

On Monday, police announced that father of four Aton Austin died after he popped a wheelie on his 2017 Kawasaki motorcycle and hit an Infiniti SUV on Rockaway Parkway and Avenue K in Canarsie about 8:15 p.m. Sunday.

“He was too experienced on a motorcycle to just go into a stopped vehicle,” his heartbroken aunt, Marlene Daniels, told the Daily News Monday. “He’s a phenomenal rider.”