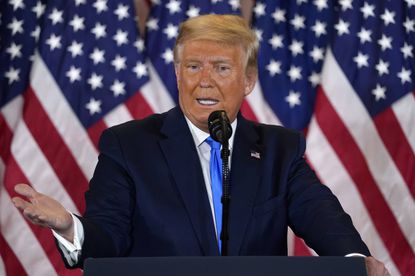 Trump again claimed on Tuesday that he would win the presidential election, and suggested that more results are expected next week.

“WE WILL WIN!” Trump tweeted in all-caps. “RESULTS START TO COME IN NEXT WEEK,” he wrote a few minutes later.

President Trump is seeking to sow doubt about Joe Biden’s victory, and still exploring the possibility of clinging to the White House despite his loss.

The Associated Press called the race for President-elect Biden on Saturday after he won 290 electoral votes. Trump’s campaign is calling for recounts and filing lawsuits in several battleground states won by the Democrat.

Election law experts and political analysts give those actions no chance of success and note that Trump’s acolytes have offered no evidence of widespread irregularities.

But Trump has so far been extremely successful in getting Republicans to back up his claims that the election was stolen from him.

Both of Georgia’s U.S. senators — who face crucial run-off elections in January — called for their fellow GOP secretary of state to resign Monday. Biden is leading Trump in the Peach State by over 12,000 votes.

Even if court actions and recounts fizzle, Trump might not throw in the towel.

Trump could conceivably seek to have GOP-controlled states like Pennsylvania and Georgia overrule the verdict of voters and award their combined 36 electoral votes to the president.

Such a move would undoubtedly be challenged by the Supreme Court where conservatives hold the majority by a 6-3 margin.