Trump, 74, mocks Biden, 77, with photo showing the elder candidate in a nursing home 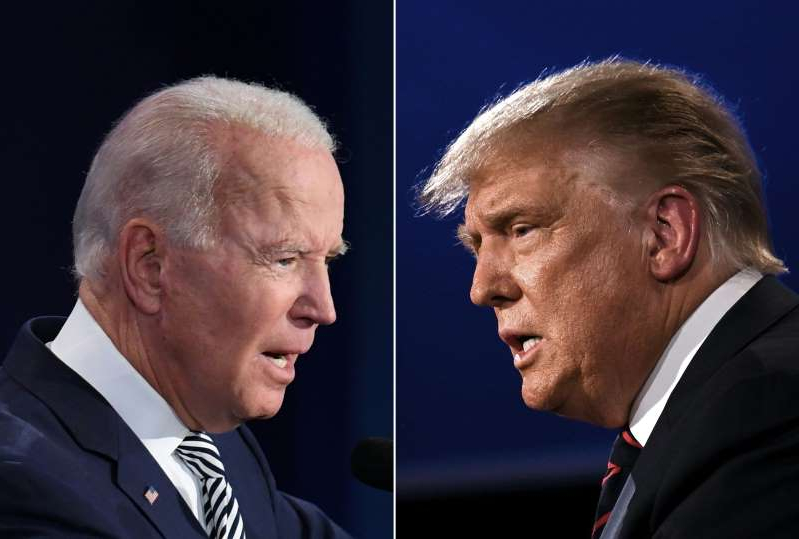 President Trump posted a doctored image of rival Joe Biden in a wheelchair and suggested the 77-year-old candidate should live in a nursing home, rather than the White House.

The altered picture appears on Trump’s Twitter feed above Biden’s campaign logo, which reads “Biden for President.” In the version Trump posted, the letter P is crossed out, leaving the ad to read “Biden for Resident.”

Trump, 74, has repeatedly questioned Biden’s mental acuity throughout their campaign. Biden, dismissing the insults, has called Trump a “clown” and a “fool.”

The posting went over well with Trump supporters on Twitter who praised the president for his politically incorrect sense of humor. Critics suggested some elderly people, who constitute a significant voting block, might have the last laugh.

“OMG, President Trump, I love your sense of humor,” tweeted Dawn Miller, who frequently cheers for the president on Twitter.

“This is one of the most disgusting things Trump has ever tweeted,” Murray wrote. “Who are the other people featured in this photoshopped image? How dare Trump insult people who reside in nursing homes & care facilities. No wonder seniors are abandoning him in droves — this is how he views them!”

Both septuagenarian candidates are courting senior voters in the finals weeks of the election, particularly in swing states Arizona and Florida, which have large retirement communities.

Hours before Trump posted his tweet, Biden was campaigning in the Sunshine State, where NBC News said he told a group of seniors that the president sees them as “expendable” and “forgettable.”

According to Biden, that’s evidenced by the president’s downplaying of the COVID-19 pandemic, which is especially deadly for elderly people.

He also said the lockdown was costing elderly people precious months away from their children and grandchildren.

Last week, the president called senior citizens his “favorite people in the world” during a videotaped speech from the South Lawn, where he promised his administration would take care of the elderly.

The president said he wanted elderly people infected by COVID-19 to get treatment comparable to what he recently got at Walter Reed hospital and that they would get the same medicine as him “Free — no charge!” once those meds are available to the public.

An NBC/Wall Street Journal poll published Oct. 4 indicates Biden holds a 62% to 35% lead over Trump with voters 65 and older and a 14-point lead overall.

A CNN survey released Oct. 6 found the race for the senior vote slightly closer, with Biden pulling in 60% of that demographic, while Trump was preferred by 39% of those in their golden years.