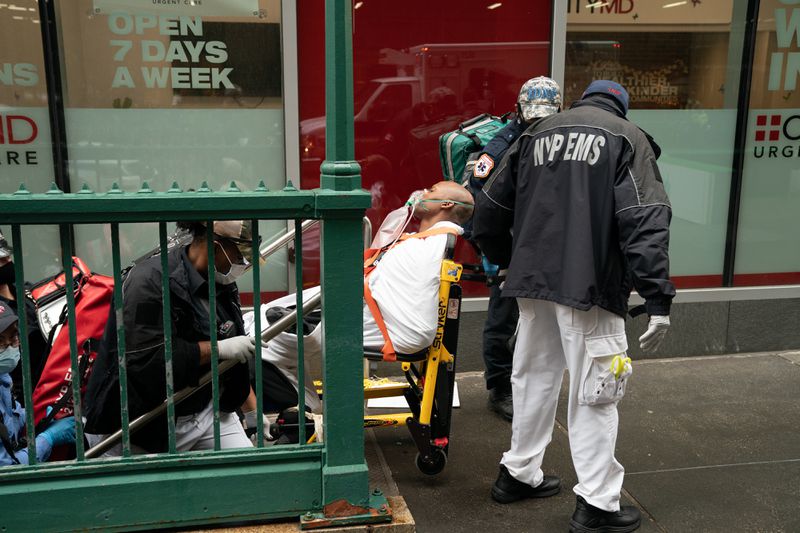 It was yet another day when subway havoc was blamed on people with psychiatric problems — despite months of complaints from straphangers, MTA workers and transit managers about unruly and violent behavior by the mentally ill that includes passengers being assaulted and shoved to the tracks and a March 2020 arson that took the life of a train operator.

Wednesday’s chaos began around 9 a.m. at the Broad St. station at the end of the J line when the crazed man broke into an empty operator cab at the front of a train, cops and MTA officials said.

The 31-year-old man brandished a wooden paddle as he barricaded himself inside the cab, which is off-limits to straphangers.

He remained holed up in the cab for around 90 minutes, stopping J service all the way back to the Chambers St./City Hall station, until the NYPD’s tactical Emergency Services Unit took him into custody, officials said.

It took police so long to pull the suspect from the train’s cab because the MTA had to cut electrical power from the tracks to make it safe for officers to walk on the roadbed and enter the train through its front door, officials said.

The lack of power meant J trains were unable to run to the Broad St. and Fulton St. stations throughout the fiasco, according to MTA officials.

MTA officials were not sure how the man gained access to the operator’s cab, but pointed out that crews exit their cabs and inspect the entire length of trains when they reach end-of-line stations.

As the suspect was taken from the station on a stretcher, he continued to shout incoherently about vaccines. He was taken to Bellevue Hospital for a psychiatric evaluation, cops said.

The suspect lives in a downtown homeless hotel on Water St., a short walk from the Broad St. station, police sources said. He has no prior arrests.

The Broad St. incident was just the start of a hellish day for unlucky subway riders.

At 10:24 a.m. — just as the suspect was arrested at Broad St. — another man who appeared to be mentally ill violently banged on a train operator’s cab door at Brooklyn’s Crown Heights-Utica Ave. station on the end of the No. 4 line, MTA officials said.

Unable to get into the cab, the man made his way to the space between subway cars, leaped onto the platform and fled the station, cops said.

But a third incident in the early afternoon fouled up service on the D and N lines in Brooklyn.

In that incident, an apparently mentally ill man halted a southbound D train near Atlantic Ave-Barclays Center around 12:40 p.m., by pulling the emergency brakes.

He then smashed the windows at the end of a train car, squeezed through one of them and fled through the subway tunnel, cops said.

The incident forced express D and N trains to run on local tracks until around 1:20 p.m.

Utano said it is high time city officials did something to crack down on attacks by mentally unstable riders on the subways — which are to resume 24-hour service on May 17.

“Restoring 24-hour subway service is a great idea, but the city has to add more mental health services, homeless outreach, and uniformed police officers to the system,” said Utano.

“Too many transit workers and riders are being harassed and assaulted right now with the current hours of operation.”