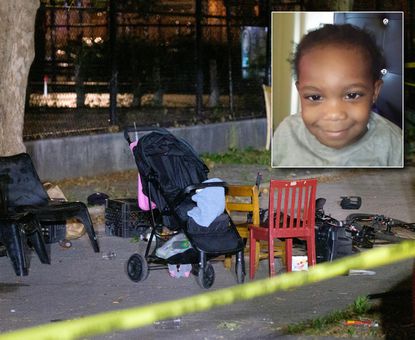 After 10 months, a suspect has been arrested in the fatal stray bullet shooting that killed a 1-year-old boy sitting in a stroller outside a Brooklyn playground, cops said Thursday.

Dashawn Austin, 25, was arrested Wednesday for murder and attempted murder for the gunplay that also wounded three men outside the Raymond Bush Playground on Madison St. in Bedford-Stuyvesant about 11:30 p.m. July 12.

Austin was one of two men who stepped out of a dark-colored Audi SUV and took aim at the cookout inside the park at 11:15 p.m., according to officials. The gunmen recklessly fired off multiple rounds, hitting little Davell as he sat in his stroller.

The baby, shot in the stomach, was rushed to Maimonides Medical Center, where he died.

“He was the joy of my life,” the slain boy’s devastated grandmother Samantha Gardner told reporters last summer. “He got his wings. He’s an angel. But he shouldn’t have to go that way. No kid should have to go that way, whether they’re 1 year old or they’re 15, 16 years old. They shouldn’t have to lose their life. Innocent lives, over somebody’s stupidity, over a coward. That’s what I call them, a coward.”

The cookout was a family gathering of people related to Davell’s mother, Gardner said.

Police said Austin was the passenger in the Audi, part of a three-car caravan that included a “blocker” car, a “chase” car and a “shooter” car.

In a deviously calculated plan, one of the vehicles sped off before the shooting, drawing nearby suspicious police away from the scene. The two other cars turned down Madison St. and circled the park before Austin and a second shooter allegedly fired into the group attending the cookout.

The shooting amplified rampant violence that erupted over the summer. Mayor de Blasio appeared visibly shaken when he visited Davell’s mother and then held a moment of silence during his daily briefing the next day.

“None of us can imagine what she’s going through, but we’re going to be there for her,” de Blasio said after his visit. “We’re going to come help her in every way and try to make sure no other mom goes through it. It was horrible to see the sheer pain and shock that she’s in.”

Austin is a member of the Hoolie Gang, which is at war with the 900 St. Gang, according to police sources.

He was already incarcerated on Rikers Island — charged with the murder of Janile Whitted, 26, outside Amour Cabaret, a self-described bikini bar on Nostrand Ave. near Herkimer St. in Bedford-Stuyvesant on March 3, 2020 — when he was linked to Davell’s murder.

Whitted, of Queens, was repeatedly shot in the chest outside the bar around 3:15 a.m., cops said. He was rushed to Kings County Hospital, but he could not be saved.

Detectives always suspected Austin’s involvement in the playground shooting and had taken the gang member in for questioning on it when he was connected to Whitted’s murder.

Austin is among 18 people named in a 63-count indictment that includes four murders and eight non-fatal shootings. The indictment includes the murders of both Davell and Whitted, officials said.

Cops and Brooklyn District Attorney Eric Gonzalez were expected to announce the indictment at a press conference later Thursday morning.

Exhausting their leads, cops in November offered a $20,000 reward for information about the gunmen in the hopes of shaking loose some fresh clues.

Austin has also been charged with assault, attempted assault, criminal possession of a weapon and reckless endangerment. His arraignment in Brooklyn Criminal Court was pending Thursday. He lives in the Glenwood Houses in Flatlands, according to cops.

Davell was his parents’ first child.

Gardner said she last spent time with Davell on the Fourth of July, when he came for the day and stayed over. She smiled at the memory of him being scared of the fireworks.

“It’s just hard to swallow right now, you know?” she said in July. “So now I have to plan a funeral. I do want it to get out, I want people to be aware that it could be anybody’s child. This has to stop. It has to stop.”