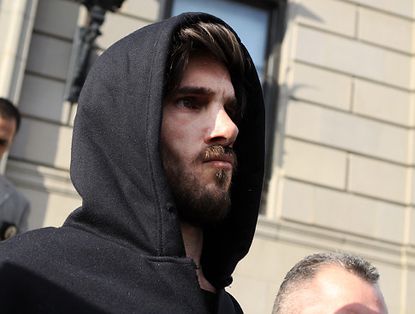 Staten Island man convicted of murdering both his parents a decade ago was granted a new trial Thursday after a panel of appellate judges found he was mentally unfit to face the first one.

Eric Bellucci, 40, a diagnosed schizophrenic, was sentenced to life without parole in August 2016 for fatally stabbing his 61-year-old father, Arthur, 33 times and his 56-year-old mother, Marian, nine times in their upscale Annadale home between the evening of Oct. 12 and the afternoon of Oct. 13 in 2010.

Bellucci fled to Israel after the grisly killings but authorities caught him trying to buy a plane ticket to China. He was then brought back to the U.S. to face trial.

Over the next five years, medical experts deemed Bellucci incompetent to go to trial four times. Doctors said he had to continue taking his schizophrenia meds to be deemed fit — but Bellucci refused the pills while being held at Rikers Island.

Despite pleas from both the prosecution and the defense, Judge J. William Garrett didn’t think Bellucci needed a new psychiatric evaluation.

But Garrett also argued that Bellucci was mentally incapable of contributing to his own defense strategy.

The judge said that it “doesn’t make any sense that the law allows a defendant who is fit to proceed but who suffers from a mental illness to make the crucial strategic choice of pursuing an insanity defense.”

Defense lawyer Mario Gallucci was forced to present an insanity defense against Bellucci’s wishes and without his cooperation, according to court papers.

The panel said in their ruling Thursday that a competent defendant should always have “the ultimate authority” to reject the use of a psychiatric defense.

Staten Island DA Mike McMahon said his office looks forward to prosecuting Bellucci again. The DA’s office has 90 days to bring forth a new case or Bellucci must be released from prison.