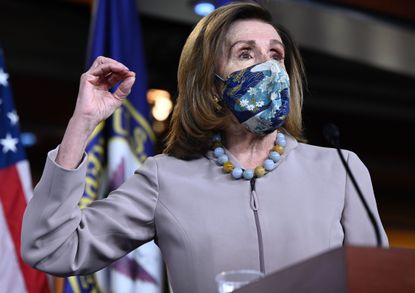 It’s beginning to look a lot like members of Congress won’t be going home for the holidays.

House Speaker Nancy Pelosi suggested Thursday that lawmakers may have to stay on Capitol Hill over Christmas in order to pass another coronavirus relief package before federal unemployment benefits and other key aid programs expire at the end of the year.

“People do want to get home for the holidays, such as that is, but what’s more important is that we get the job done for the American people,” the California Democrat told reporters at her weekly press conference.

Pelosi, who’s leading Democrats in the at times confounding stimulus negotiations, noted that Congress has stayed in session over the holidays before.

Congress is supposed to recess for the rest of the year on Dec. 18, but lawmakers still need to pass annual spending bills to avert a federal government shutdown and hope to appropriate a stimulus package as well.

The House bought itself some time Wednesday by passing a continuing resolution that keeps the government open on the same spending levels for another week past Friday’s shutdown deadline. The Senate is expected to pass the same bill before the government runs out of cash at midnight Friday.

That leaves lawmakers one week to hash out a stimulus measure that lawmakers hope can be attached to a long-term government spending bill ahead of the new Dec. 18 shutdown deadline.

Pelosi said the main priority for her is passing a stimulus that renews a couple of critical federal unemployment programs before they expire the day after Christmas.

Pelosi, Senate Minority Leader Chuck Schumer (D-N.Y.) and a growing bipartisan group of lawmakers are favoring a $908 billion stimulus blueprint that would fill up the unemployment programs and renew the lapsed federal jobless enhancement at $300 per week; provide budgetary relief for strapped governments in states like New York; allocate more aid for small businesses, and earmark cash for COVID-19 vaccine distribution, among other provisions.

But Senate Majority Leader Mitch McConnell (R-Ky.) and President Trump’s chief negotiator, Treasury Secretary Steven Mnuchin, are favoring another package that would not bring back the enhanced federal unemployment provision or provide bailouts for states. Instead, the McConnell-Mnuchin bill would bankroll $600 stimulus checks to most U.S. taxpayers while renewing the baseline unemployment programs.

Democrats are not happy with the Mnuchin proposal.

Dems also aren’t keen on the idea of not bringing back the lapsed federal unemployment boost that kept millions of Americans afloat in the spring.

Stimulus talks were expected to continue through the evening Thursday, with McConnell, Pelosi, Mnuchin and Schumer doing most of the talking behind closed doors.

Aside from the leadership negotiations, some rank-and-file members are striking out on their own.

Sen. Josh Hawley (R-Mo.), an ardent conservative, is finding unusual common ground with progressives like Rep. Alexandria Ocasio-Cortez (D-N.Y.) in pushing for another round of the $1,200 stimulus checks that most taxpayers got from the first relief package this spring.

“It’s exactly what every senator voted for once,” he said. “And if the negotiators can’t reach some sort of compromise, I will go to the floor next week and I’ll ask for an up or down vote on that — on direct relief to folks.”