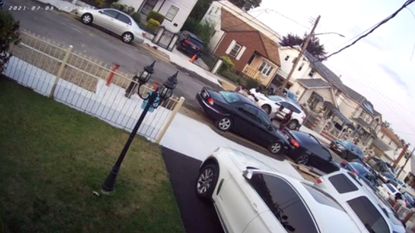 An off-duty NYPD cop pulled a gun and threatened to “blow up” his neighbor’s car and home during an unhinged quarrel over a parking spot in Queens early Tuesday, authorities said.

Officer Aaron Cooper got into the crazed argument with resident Devon Ridge, 56, outside his home on 154th St. in Springfield Gardens about 1:30 a.m., cops said.

“I’m going to blow up your X6 and your house,” Cooper, 23, allegedly screamed, referring to the BMW X6 parked in Ridge’s driveway, officials said.

Ridge said before the argument even began, Cooper allegedly slashed a tire on Ridge’s car. Once words were exchanged, the cop allegedly pulled his gun and kept it at his side as he threatened Ridge.

“He came towards me with his hands in his pocket,” Ridge told the Daily News. “I never knew he had a weapon on him at the time.”

Cooper never pointed the gun at Ridge and ultimately put the gun in his own car, cops said. When officers were called to the scene, the gun was found in the cop’s front passenger seat, authorities said.

Cooper was arrested on charges of menacing, criminal mischief, harassment and weapon possession.

Ridge said the argument erupted after Cooper took offense because one of his other cars — a 2002 Jaguar— was parked close to Cooper’s vehicle.

Cooper was visiting a home next to Ridge’s, and had parked in front of Ridge’s Jaguar, Ridge told The News.

Ridge said he had moved the Jaguar up a bit to avoid getting a ticket for parking too close to a fire hydrant. Cooper thought the move was too close to his own car’s bumper, Ridge recounted.

“He never identified himself as a police officer,” Ridge said. “I told him that I was going to call the police because you have a firearm.”

“He could’ve shot me when I turned my back, but God is good because I’m still here,” Ridge said.

Ridge’s wife, Yvonne, told The News that she called 911 twice.

“When he [Devon] came in the first time and said ‘gun,’ I didn’t take him serious, but he came back a second time,” Yvonne Ridge told The News.

Devon Ridge asserted “all of a sudden, the gun came out and he could’ve shot me.”

“The NYPD is putting weapons in the wrong hands and making good cops look bad,” Ridge added, noting his grandchildren visiting from Atlanta for the summer were inside his house while the dispute took place.

Cooper was suspended from the NYPD after his arrest. Since he has been on the force for only about a year and is still on probation, his arrest may lead to his termination, officials said.