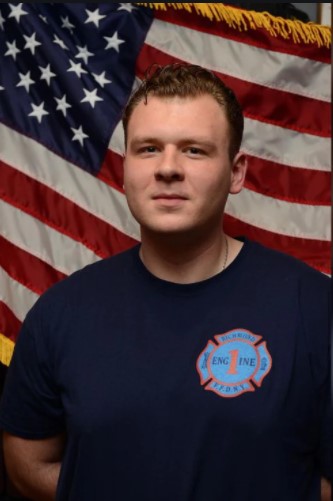 A young off-duty EMT with dreams of becoming a firefighter died in a fiery crash after he slammed into a city high school on Staten Island, police said Wednesday.

Vladimir Sabatelli, 24, was behind the wheel of a speeding Dodge Challenger when he lost control and crashed into the front of Susan E. Wagner High School on Manor Road near Brielle Ave. in Manor Heights about 11:35 p.m. Tuesday, cops said.

Firefighters pulled Sabatelli from the wreck but he died at the scene.

Department of Buildings investigators determined the school building was not structurally damaged from the crash, cops said.

Sabatelli just started working as an FDNY EMT out of Station 55 in the Bronx in September, and used to volunteer for Richmond Engine Co. No. 1 on Staten Island, said a close friend, who didn’t give her name.

The friend gathered with Sabatelli’s distraught relatives at his Brighton Beach, Brooklyn home Wednesday afternoon. His mother was too devastated to speak to a reporter.

Sabatelli last spoke to his mom about 7:30 p.m. Tuesday, three hours before the crash, and told her he was heading to work, the friend said, though it’s not clear if he meant he was headed to the EMS station or the volunteer firehouse.

Usually, he’d text his mother when he got off work, but that message never came, leaving family members to think the worst, the friend said. They learned of his death Wednesday morning.

“It’s a nightmare. I think everybody, the mom thinks the same,” the friend said. “I still can’t believe it, he was the most kind guy you would ever know.”

“I just think it’s a bad car accident but I just wish we knew more,” she added. “He never drank, he never did drugs. Never.”

Messages of condolence were posted on Facebook by Sabatelli’s friends, as well as by the volunteer fire company Wednesday.

“Vlad was a great guy in the academy,” wrote one pal, Matt Molina. “He was always so nice and always there to put a smile on your face. You will be missed brother. We got it from here.”

A close friend told the Daily News that Sabatelli loved to cook and would always bring food to work for his fellow EMTs.

“It’s a very big loss for everyone,” she said. “He’s very good, very kind guy, always helpful. If you needed any help, he would be there for you.”