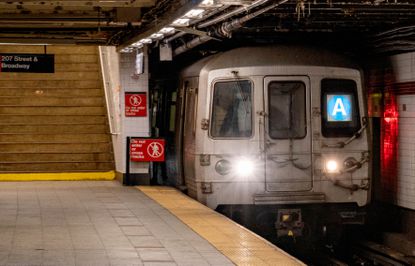 Weed is now legal in New York — but tens of thousands of government employees in the state can’t smoke the devil’s lettuce if they want to keep their jobs.

Marijuana remains illegal under federal law, and workers whose jobs are regulated by the feds would still be fired if they test positive for the drug.

Transit workers are required by the Federal Transit Administration to have their urine tested for drugs including cannabis before they’re hired, whenever they’re in an accident, and randomly throughout their employment.

Tetrahydrocannabinol, or THC, the active chemical in the sticky icky, can be detected in urine weeks after someone consumes the drug.

The main transit workers’ union also has warned members that the state’s legalization of pot does not permit them to toke.

“Current federal law and the tests do not distinguish between being under the influence today and having taken a puff when you were on vacation last month,” Transport Workers Union Local 100 wrote on its website Wednesday. “In other words, don’t smoke it or ingest it no matter what the State of New York does regarding marijuana.”

The new law signed by Gov. Cuomo on Wednesday — which lets people over age 21 blaze up — does not mean NYPD officers will be allowed to smoke, police brass say.

“Rules governing the use of marijuana for members of the NYPD have not changed,” said a police spokeswoman.

Weed rules for the city’s firefighters and EMS workers are hazier.

FDNY sources said the department is reviewing its policies to see what needs to be changed given weed is legal under state law.

United Firefighters Association president Andrew Ansbro said department officials plan to clarify what pot legalization means for firefighters in the “near future,” but is cautioning his members that they still may not be allowed to get high.

FDNY EMT Benjamin Lerich last month sued the city after he was told he couldn’t smoke his medically-prescribed weed to treat his chronic Crohn’s disease. “The Fire Department is living in a bubble when it comes to medical marijuana,” Lerich said.

Marijuana sales won’t be legal in New York until at least 2022 — but under state law, New Yorkers can toke up wherever cigarette smoking is permitted.

Smoking is banned in all NYC Transit, Long Island Rail Road and Metro-North facilities — and that rule applies to marijuana as well as tobacco, MTA officials say.

Members of the public can, however, consume edibles — or food that contains weed — while riding trains and buses, so long as they don’t work for the agency.