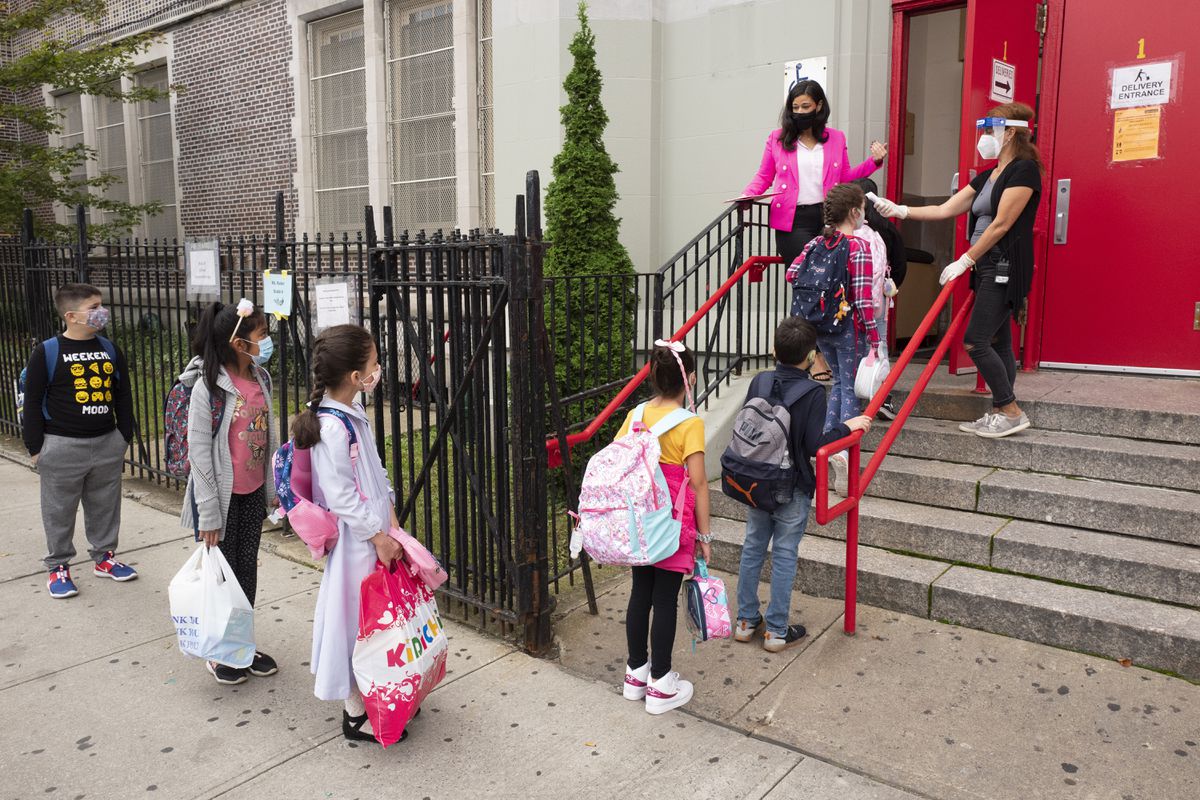 New York City kids are finally back to school full time — but on Monday there may be no one there to feed them a hot lunch.

The union that represents 9,000 school food workers is bracing for big shortages Monday from members who decide to go on unpaid leave rather than comply with the COVID-19 vaccine mandate.

The Department of Education is preparing to jump to “emergency menus,” which include cold food in grab-and-go containers instead of the typical hot fare if the cafeteria shortages bear out, Nesbitt added.

A DOE spokeswoman confirmed that officials are preparing for meal service changes “at some locations if staffing is an issue,” noting that some schools have already chosen to use the grab-and-go meals.

Just 80% of the DOE’s 148,000 employees had uploaded proof of a jab as of Thursday, according to the most recent figures from the agency. The number jumps to 87% for teachers — but that still leaves roughly 10,000 teachers who would have to go on unpaid leave if they don’t get vaccinated in time.

Staffers can return from classrooms to unpaid leave at any point during the year if they decide to get the shots. DOE employees also had the right to apply for medical and religious exemptions. Officials haven’t said how many applications they received, and how many they granted.

The vax-related shortages will likely be worse at some schools than others.

Hi @NYCSchools, Petrides School has 86 unvaxxed staff, IS34R has 35, IS75R over 50 & IS7R over 40…how are they supposed to operate on Tuesday? Seriously

I’ll point out, parents, students & staff are comfortable enough to have high attendance rates there today. Its you, not them

But some principals have already reported difficulty finding and holding onto qualified substitutes during the first two weeks of school — and anticipate the shortage growing even worse next week.

“We don’t even have enough staff right now,” said one elementary school principal in Manhattan who spoke on the condition of anonymity. “We’ve been asking for substitutes and we don’t have enough.”

De Blasio added that he is also prepared to deploy staffers from the DOE’s central offices “to step into different roles if needed.”

But the unions representing both teachers and principals — which are both parties to an ongoing lawsuit challenging the legality of the vaccine mandate — said those measures won’t cut it, and asked Thursday for a delay to the mandate, which was announced on Aug. 23.

“Despite our repeated warnings, the city is ill prepared for the impact of the vaccination mandate on staffing in schools and early childhood centers with just four days to go before it takes effect,” Council of School Supervisors President Mark Cannizzaro said Thursday.

Cannizzarro didn’t specify when the mandate should take effect.

Michael Mulgrew, the president of the United Federation of Teachers, echoed Cannizzaro’s call, saying “our schools are not ready for the implementation of the vaccine mandate.”

DOE spokeswoman Katie O’Hanlon said “the vast majority of employees have been vaccinated and the number will continue to rise over the coming days. We administered 7,000 vaccinations on school campuses across the city last week, hired thousands of new teachers and staff, and have a large reserve of qualified workers who are ready to fill in if needed.”