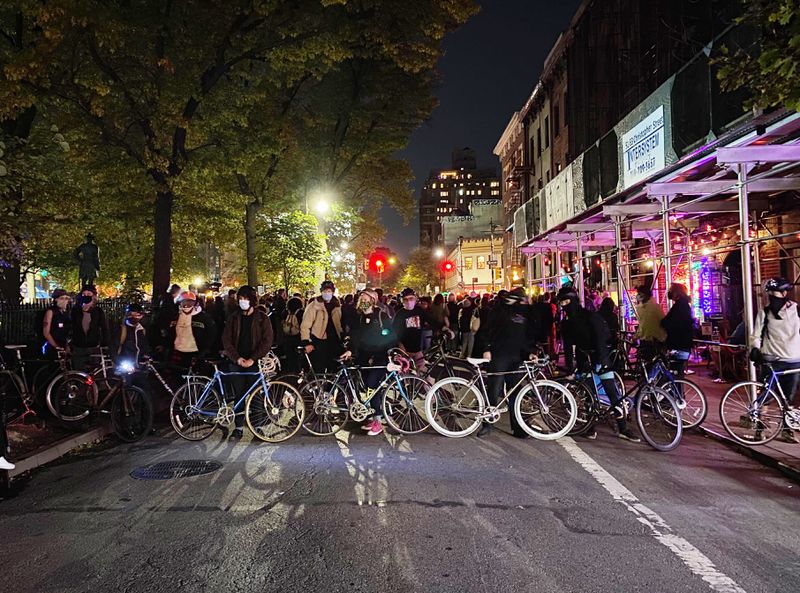 Nineteen people were arrested during a Thursday night protest march from the Stonewall Inn through Lower Manhattan, including a man that tried to wrap a heavy metal chain around a cop’s neck, the NYPD said.

Cops rounded up 13 men and six women during the tense clash where bicycle officers tried to corral demonstrators onto the sidewalk and into Union Square Park.

Ten people received desk appearance tickets for a variety of misdemeanor crimes, meaning they will have to answer the charges in court at a later date. Another eight people received summonses.

The only protester taken to court was Levon Wheeler, 30, who was charged with felony assault and other crimes after he fought with police at Bond St. and Broadway.

Wheeler, who goes by the alias Antonio Webber and lives in a psychiatric shelter on Ward’s Island, tried to wrap a metal chain around an officer’s neck, the NYPD said. Police posted a photo of the chain on social media.

“Tonight, while performing their duties near Bond St & Broadway in Manhattan, an officer was pushed to the ground & had this chain pressed against his throat,” the department tweeted.

Wheeler did four years in prison after he was arrested for punching a worker at Paragon Sports while trying to leave the store with a pair of boxing gloves stowed into his pants, officials said. He was released from prison in July 2019, according to court records.

Only two of the 19 demonstrators taken into custody were from outside New York state, officials said.

Thursday’s protest began when several hundred people gathered to hear Black trans women sing and speak outside the famous West Village bar in what’s been a weekly event since the summer.

The police presence was significantly higher at this week’s event amid citywide protests and the presidential election.

The group left the area of the Stonewall Inn and marched toward Broadway by going down W. 4th St. past Washington Square Park.

At about 7:45 p.m., as the group headed south on Broadway, when marches began to break off from the main group, sparking clashes with police.

About 150 cops wearing cycling helmets and shoulder pads used bikes to push marchers back and began shoving news reporters covering the march, including a 1010 WINS reporter who was knocked to the ground.

But Thursday’s arrests were minuscule compared to the night before when 57 people were arrested during a wild Manhattan protest where marchers clashed with police and set small fires.

One protester, Devina Singh, 24, was arrested after being caught on camera spitting in an officer’s face and calling him a “fascist.”

Singh, of Pennsylvania, was charged with obstructing government administration and given a criminal court summons for spitting, which is a violation of COVID-19 rules.

It was at least the third arrest for the perennial protester in as many months, officials said.