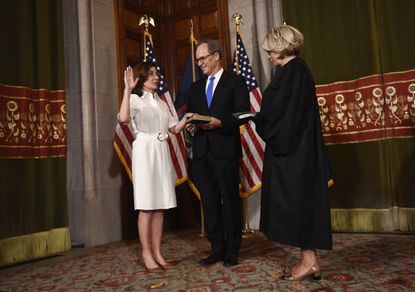 Kathy Hochul was sworn in Tuesday as the first woman governor of New York and wasted no time signaling a fresh start from the reign of disgraced former Gov. Cuomo.

The newly minted governor pointedly said her biggest priority would be restoring confidence among New Yorkers, a barely concealed dig at Cuomo and his toxic governing style.

“I want people to believe in their government again,” Hochul said. “I take that very seriously.”

Hochul, 62, said in a brief question-and-answer session that her key priorities would be getting COVID-19 assistance to tenants and taking over the reins of the pandemic recovery

She vowed to work “collaboratively” with legislative leaders and promised a new era of cooperation with Mayor de Blasio, with whom Cuomo famously feuded incessantly.

“There will be no blindsiding,” Hochul said about de Blasio. “We need cooperation.”

Chief Judge of the Court of Appeals Janet DiFiore presided over the swearing in at the State Capitol, hours after a similar official ceremony just after midnight when Cuomo’s resignation amid sexual harassment allegations tood effect..

In a nod to Hochul’s groundbreaking role, DiFiore wore a gown once worn by the Judith Kaye, the first woman to serve as chief judge.

Hochul will deliver her first address as governor later in the day.

The newly christened leader has already vowed to help New York turn the page from the tumultuous final six months of Cuomo’s tenure which were shadowed by the misconduct claims, an impeachment probe and questions about his administration’s handling of the COVID crisis.

She promised to ax any Cuomo staffers implicated in the damning report from Attorney General James’ office that revealed the former governor sexually harassed 11 women and presided over a “toxic” workplace.

Hochul has said repeatedly she knew nothing of the behavior outlined by investigators in James’ report.

Cuomo, 63, despite announcing earlier this month that he would quit rather than face a likely impeachment trial has remained defiant, refusing to admit to any wrongdoing.

In a pre-taped farewell address aired on Monday, Cuomo continued to paint the investigation into his behavior as biased and cast the allegations against him as politically motivated.

The outgoing governor submitted a letter late Monday evening to the leaders of the state Assembly and Senate saying his resignation was effective at midnight.

She named Karen Persichilli Keogh, a former aide to Hillary Clinton and most recently the head of global philanthropy at JPMorgan Chase, as her pick for secretary to the governor, the state’s top appointed position.

A moderate Democrat with deep ties to her hometown of Buffalo, Hochul has yet to name a lieutenant governor.

She has said the decision will come before the end of the week and her choice will likely be someone from the city as she eyes a run for a full term in office next year.

Upon entering office, Hochul will face a host of issues aside from purging Cuomo loyalists. She inherits a problem-plagued COVID rent relief program, a worker shortage at state agencies as well as the Metropolitan Transportation Authority, and concerns about the delta variant as schools reopen.

Hochul was first elected lieutenant governor in 2014, running alongside Cuomo despite the pair not having an exceptionally close relationship.

One of six siblings, she graduated from Syracuse University and earned her law degree from Catholic University of America in 1983. She served 14 years on the Hamburg town board, a suburb of Buffalo, before becoming county clerk in Erie County and winning a special election for an empty seat in Congress.

She is married to William Hochul, an attorney who served as United States attorney for the Western District of New York. The couple have two adult children.