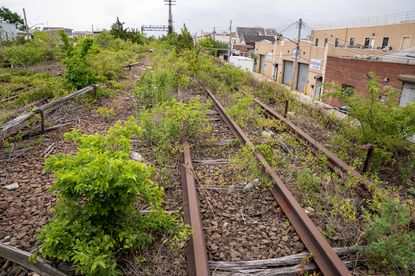 A set of railroad tracks abandoned a half-century ago may be key to speeding up commutes for tens of thousands of Queens residents — but a report published last month by an advocacy group suggests the MTA has no interest in moving the project forward.

Queens straphanger groups and transit planners have for years called for the Metropolitan Transportation Authority to revive the route, either by restoring LIRR service or refitting the abandoned line for subway service.

But those hopes were largely dashed in 2019 when the MTA released a consultant report on the proposed project that estimated bringing subway service to the tracks would cost $8.1 billion — a price that felt high to some, even by the MTA’s standards.

The report prompted the nonprofit QueensRail to commission a consultant report of its own. Published last month, it estimated the project’s cost at as little as $1.8 billion, less than a quarter of the MTA’s estimate.

“I think one of the reasons the MTA doesn’t want to do this is, extra operating costs that come with extra trains,” said said Andrew Lynch, QueensRail’s chief design officer. “And they also might see this as something that siphons ridership away from other lines,”

“This isn’t the first study the MTA has done on this,” Lynch said. “Every time a new one comes out the price gets higher and higher. Why does this project get sandbagged?”

Lynch wants the MTA to divert the subway’s M line service from its current northern terminus in Forest Hills to the abandoned line.

Under his plan, the line would include new or reactivated stations at Metropolitan, Jamaica, Atlantic and Liberty Aves., and would connect to the A train at Howard Beach and replace the Rockaway shuttle.

The subway option would also require a 3,000-foot tunnel beneath the LIRR’s main line near Queens Blvd. The MTA’s 2019 report said that can’t be done without impacting service.

The new tunnel would run beneath some buildings with deep foundations to connect the abandoned Rockaway line to the subway tracks beneath Queens Blvd.

MTA officials said its $8.1 billion estimate for the subway expansion was deliberately made high to manage expectations and avoid any cost overruns. But representatives from the agency also said the sky-high price tag was appropriate.

“The estimate of costs contained in the 2019 study are consistent with industry standards and at the low end of likely requirements from the Federal Transit Administration,” said MTA spokesman Aaron Donovan.

The plan is also opposed by some homeowners who live along the tracks.

“It’s right against my backyard, and I have grandkids and pets back there,” said Mary Fleischmann, who lives on 98th St. in Ozone Park around the corner from an abandoned station on Atlantic Ave. the project’s advocates want to reactivate.

“If people want to get to the beach, they should move to the beach,” said Fleischmann. “If you were looking for that, you shouldn’t have moved to this part of Queens.”

Fleishmann has lived in Ozone Park since 1989 and said her “house would fall apart if they started running trains” on the Rockaway branch. She also opposes another pitch called QueensWay, which would turn the tracks into an elevated park similar to the High Line on Manhattan’s West Side.