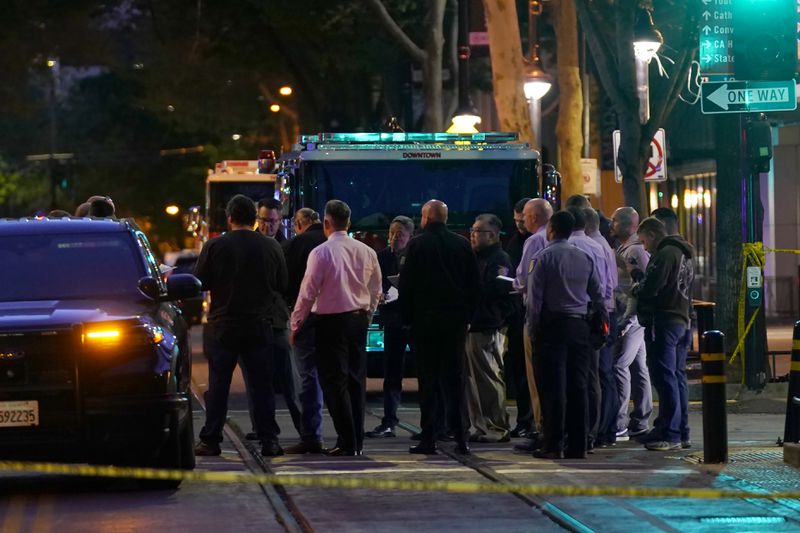 Six people were gunned down and a dozen more injured in an early Sunday mass shooting in a busy downtown section of Sacramento, California’s capital city.

Police were searching for at least one suspect and had recovered at least one firearm. They were also reviewing video footage posted to social media showing what appeared to be an altercation before the gunfire erupted.

Sacramento police reported a four-block stretch was closed around 3:30 a.m. “as officers investigate a shooting with multiple victims.”

“Please avoid the area as a large police presence will remain and the scene remains active,” police added.

Sacramento Mayor Darrell Steinberg tweeted of his “shock” and “sadness,” and called for more gun control.

“Words can’t express my shock & sadness this morning. The numbers of dead and wounded are difficult to comprehend. We await more information about exactly what transpired in this tragic incident,” he wrote. “Rising gun violence is the scourge of our city, state and nation, and I support all actions to reduce it.”

ADVISORY: 9th St to 13th St is closed between L St & J St as officers investigate a shooting with multiple victims. Conditions unknown at this time. Please avoid the area as a large police presence will remain and the scene remains active. Please follow this thread for updates. pic.twitter.com/lGhUJCnLWe

A timeline strewn together by ABC News in Northern California begins with reports of shots being fired shortly after 2 a.m. Sunday followed by a report of an assault weapon being detected in a nearby parking garage. Shortly after, five people were reportedly “down” and police units were called to the scene at 2:08 a.m. A gun was said to have been located at 2:37 a.m. Shortly before 3 a.m. hospitals begin filling with those injured in the melee.

Rapper Tyler the Creator had performed in downtown Sacramento’s Golden 1 Center Saturday night, about a block from the central area where the shootings erupted. Community activist Berry Accius said he headed for the crime scene after getting word of the massacre.

“I saw a young girl with a whole bunch of blood on her body, a girl taking off glass from her, a young girl screaming saying, ‘They killed my sister,’” he said.

Authorities are searching for at least one suspect. Lester called the site of the shootings “a very complex and complicated scene” and asked for the public’s help in breaking the case.

“What we do know at this point is that another mass casualty shooting has occurred, leaving families with lost loved ones, multiple individuals injured and a community in grief,” the governor said.

The shootings occurred just blocks from the state capitol. It’s unclear what kind of weapon was used in the killings.