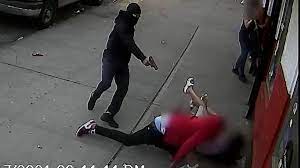 Michael Lopez, 27, was taken into custody early Friday and charged with attempted murder, assault and reckless endangerment among other charges for the June 17 gunfire outside a Sheridan Ave. bodega in Mount Eden.

The two siblings, Mia, 13, and her 5-year-old brother, Christian, were heading to the store to buy a loaf of bread when the gunman, dressed all in black, hopped off a scooter and chased a man down the block.

The gunman’s target, Hassan Wright, 24, barreled into the two children and they all toppled onto the sidewalk in a tangle, horrific video from the scene shows.

Unfazed by the children’s presence, the callous gunman opened fire at least six times, hitting Wright in the back and both legs.

“Kill him! Kill him!” the accomplice yelled as the gunman opened fire, a witness told reporters.

“Her first instinct was to protect her little brother,” Diaz said of Mia. “She wants to be a police officer. Get a load of that, she’s already proven to be a protector.”

Neither child was hit, officials said. Wright was hospitalized but is expected to survive.

The shooting outraged mayoral frontrunner Eric Adams, who offered a $2,000 reward for the gunman’s capture.

“It tore me apart to watch those children scramble as gunshots were still going off,” Adams said at the time. “This is New York, not some third-world country. We can’t be silent. Our silence is just as dangerous. Our children must be safe.”