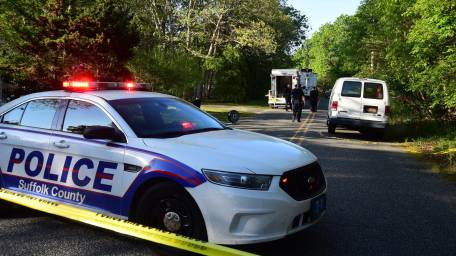 A man was shot and killed by Suffolk County police in Manorville.

It happened on Bauer Avenue at around 10:45 p.m. Thursday.

A 911 call about a suspicious person lying in the backseat of a car brought officers to the scene.

The officer engaged the man inside the car and a struggle ensued.

The officer fired his gun, striking the man.

Police say a knife was recovered from the man, who was declared dead at the scene.

His identity has not yet been released.

The officer was transported to Peconic Bay Medical Center for treatment of unknown injuries.

Suffolk County Homicide Section detectives along with investigators from the New York State Office of the Attorney General Office of Special Investigation are investigating.

Detectives are asking anyone with information to call the Homicide Squad at 631-852-6392 or call anonymously to Crime Stoppers at 1-800-220-TIPS.