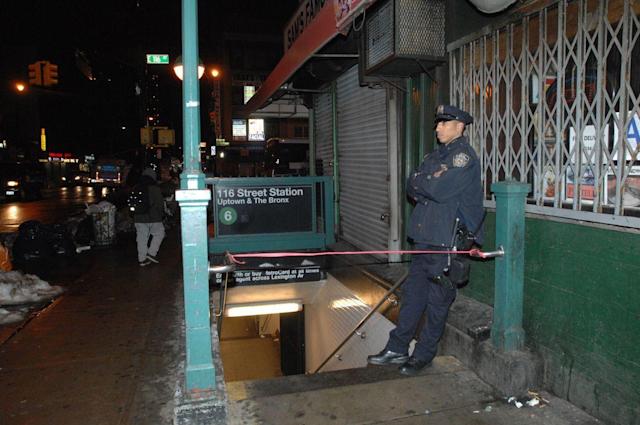 A trio of bad Samaritans slashed a man in front of his family on an East Harlem subway platform — all because they mistakenly believed he was harassing his wife, the victim’s family said.

Luis Sanchez, 31, had been celebrating Mother’s Day and was chatting with his wife and her two daughters on the No. 6 train platform at E. 116th St. early Monday when three homeless men mobbed him and slashed him in the face, the family recounted.

The suspects were sitting on a bench about 3:20 a.m. and thought Sanchez and his wife were strangers and that Sanchez was hassling her, said the victim’s 18-year-old stepdaughter, Jessica Martinez.

The three men then mounted an overzealous, violent rescue, she recounted.

“Me and my mom were already waiting for the train. My stepdad was behind us, and they thought he was bothering us because he was in the back and walking slow,” Martinez recalled. “I said, ‘That’s my stepdad,’ but they didn’t listen. They surrounded him.”

One of the assailants pulled out a blade and sliced Sanchez in the face.

“I pulled him away and I called the cops,” Martinez said. “They just sat there…. It happened so fast.”

Sanchez needed stitches to close the slashing on his lips, and was unable to talk Monday night, his family said.

“They didn’t have to use a knife,” said Martinez. “Bringing out a weapon, it could’ve went in his head. He flinched, that’s why it went in his lips.”