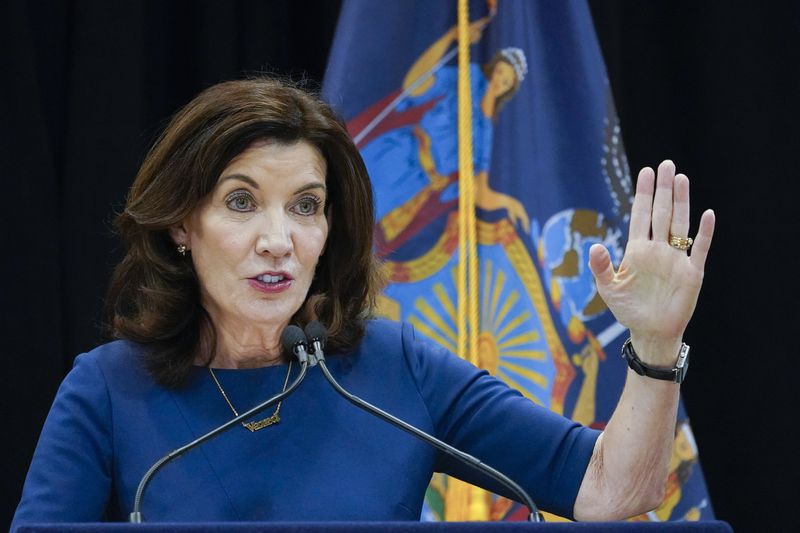 Facing an accelerating COVID threat to New York hospitals, Gov. Hochul said Monday that the state was girding to keep beds open and to maintain staffing, but that the economy and schools are on track to remain open.

New York State’s total count of daily coronavirus hospitalizations hit 5,526 on Monday, up about 80% since the beginning of the month.

“We’re preparing for all scenarios, including the worst scenarios, which we’re not at,” Hochul said in a news conference in Albany before a coronavirus call with President Biden and other governors.

She said New York had not yet tipped into a medical crisis and that the state is far better prepared than it was in past COVID surges.

But unprecedented case counts — driven by the spread of the immunity-dodging omicron strain — and increased examples of severe illness among unvaccinated children have raised alarms for health officials.

The state has worked to increase hospital bed capacity by pausing nonessential procedures and to distribute workers to high-need areas. Hochul said bed capacity was up 8% since last month, and hospitalization rates remain much lower than in previous surges.

The omicron wave has generated concerns among parents that schools may not reopen smoothly after winter break.

Hochul said the state was considering school closings “on an ongoing basis” but added that New York is “not there yet.” She called the holidays a “vulnerable time” but expressed hope that the surge will be brief and shutdown-free.

The governor added that she would take a call with some 500 school superintendents on Tuesday to discuss the post-holiday reopening of schools.

The daily virus case count in New York climbed close to 50,000 on Christmas — a startling number for a state that started a run of all-time records when the daily tally rose to a touch over 21,000 on Dec. 17. Even if most cases are mild, the sheer scale of the wave could ensure a rise in hospital admissions.

Daily case counts slipped back below 40,000 over the weekend as families gathered and testing rates dropped, but they may surge anew after the holidays.

The risk from omicron stems principally from the volume of cases, said Dr. Mary Bassett, the state health commissioner. She suggested the evidence is increasingly clear that individual omicron cases tend to be more mild than cases from other strains.

But she noted that pediatric coronavirus hospitalization admissions more than doubled statewide across two weeks in December.

“Many people continue to think that children don’t become infected with COVID,” Bassett said in her first news conference after she contracted a breakthrough case this month. “This is not true. Children become infected, and some will be hospitalized.”

New York’s hospitals appear to be faring better than many overwhelmed medical centers in Midwestern states, where vaccination rates are lower.

But hospitalizations lag behind cases, and the picture is growing bleaker in New York.

On Monday, with year’s end approaching, Hochul urged New Yorkers to opt for outdoor New Year’s Eve gatherings and to continue to get their vaccine shots.

“This time last year we were so excited to say goodbye to 2020, anticipating that we were also saying goodbye to COVID and the pandemic,” the governor said. “No one could have foreseen that we would be experiencing this one year later. And we’re going to continue to be vigilant.”