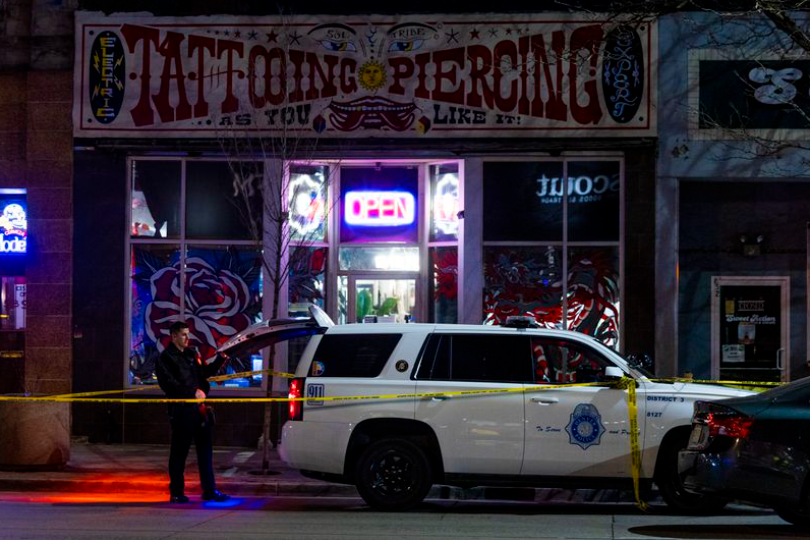 At least four people are dead, as well as the suspected gunman, after a cross-city shooting spree near Denver late Monday, according to police.

The suspect, who has not been publicly identified, began around 5 p.m. in central Denver, where he killed two women and shot a man, Denver Police Chief Paul Pazen said during a press conference Monday night. He then moved several blocks away and killed a man.

That’s when police arrived and traded gunfire with the suspect, according to Pazen.

The suspect fled to Lakewood, about 10 minutes away, and there killed another person at a business around 6 p.m.

Officers again found his car and exchanged gunfire and the suspect fled on foot to a nearby Hyatt hotel, where he shot the desk clerk and a responding cop.

The suspect was eventually shot and killed, but Lakewood Police Department spokesman John Romero would not specify if he had been shot by a police officer.

The officer was still in surgery during Monday night’s press conference and a spokesperson for the Lakewood Police Department did not immediately return a request for updates from the Daily News Tuesday morning.

The condition of the clerk is unknown, as well as the man shot at the first location in Denver.

A spokesperson for the Denver Police Department directed The News to the Denver coroner’s office, which did not immediately return a request for comment.

“We believe this individual was responsible for this very violent series of events that took place in the Denver-metro area,” Pazen said Monday, referring to it as a “killing spree.”

Police have not yet determined a motive.

This marks the 687th mass shooting, identified as four or more people killed or injured, not including the suspect, in the U.S. in 2021, according to the Gun Violence Archive.