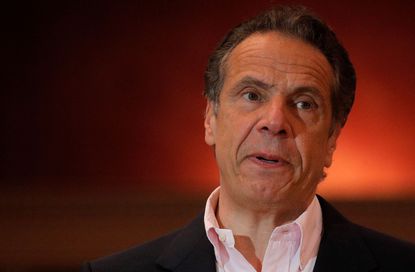 The staffer who accused Gov. Cuomo of groping her is speaking out, detailing the harrowing encounter and alleging the state’s most powerful politician groomed her over the course of two years.

The unnamed woman describes the governor slamming the door of his office in the Executive Mansion after telling her “I don’t care” when she resisted his unwanted advance.

“That wasn’t just a hug,” she told the Albany Times Union. “He went for it and I kind of like was, ‘Oh, the door is right there.’ … I was mortified that a woman who works here is going to come in and see.

“He came right back and he pulled me close and all I remember is seeing his hand, his big hand. I remember looking down like, ‘Holy s–t,’” the aide added.

The woman said the 63-year-old governor had a habit of hugging her too tight and engaged in a pattern of inappropriate behavior that led up to last year’s incident, in which Cuomo allegedly embraced her and reached under her blouse.

“I was just so confused and so taken aback by it … He never said anything, which was odd,” she said.

Cuomo’s conduct is being investigated by independent lawyers working under Attorney General Letitia James after several women, including several current and former staffers, came forward with claims of sexual harassment and misconduct.

Investigators have subpoena power to seek documents and compel witnesses, including the governor, to testify under oath.

The alleged groping victim was interviewed by James’ outside investigators on March 12, the Times Union said. The newspaper first reported some details of the encounter last month.

Rita Glavin, a high-powered criminal defense attorney representing the governor, said Cuomo “has repeatedly made clear that he never made inappropriate advances or inappropriately touched anyone.”

“The Attorney General’s review of this claim and others, including evolving details and new public statements by complainants or their surrogates, must be thorough, fair and provide the truth,” she added.

Cuomo has resisted calls for his resignation from both sides of the aisle as the scandal erupted and his administration came under fire for it’s handling of the COVID crisis and faced allegations of intentionally obscuring the true number of deaths in nursing homes during the pandemic.

The accusation made by the current staffer first came to light as members of the executive chamber watched the governor deliver a March 3 press conference in which he said he never touched any woman inappropriately.

The aide became emotional as Cuomo emphatically denied the allegations against him and said he was sorry if he made anyone uncomfortable. She confided in a fellow staffer about the November encounter, in which she was summoned to the governor’s mansion to assist him with his cellphone.

“I don’t remember actually saying the word ‘Stop.’ I think I said, ‘You’re crazy,’” she told the Times Union. “I do remember saying that, and that’s when he ultimately stopped. … Me saying ‘You’re crazy’ — that was definitely not something that he wants to hear. It definitely was a hit to his ego. … And then it was almost like instantly he was done.”

The woman still works at the State Capitol, despite receiving fewer assignments and what she describes as an occasional “dirty look” from fellow employees, according to the Times Union.

She also said she believes the governor was grooming her for a relationship over a two-year period, through inappropriate behavior that included hugs and kisses on her cheek.

“It was never in front of anybody,” she said. “He made sure that it was either at the mansion or, if it was at the Capitol, that no one was around.”

Her comment echoes those made by Charlotte Bennett, a 25-year-old former Cuomo aide who has said she was summoned to the Capitol on a weekend early last year and left alone with the governor, who also asked her for help with his cellphone.

She claims Cuomo asked about her sex life and asked whether she would be open to a relationship with an older man.

Bennett told CBS News last month that she believes the governor was grooming her and propositioning her for sex.