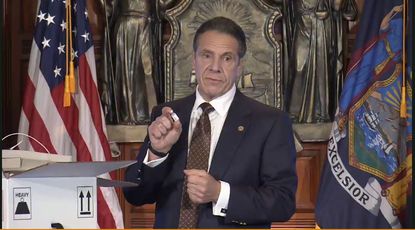 A day after announcing New York is expecting to receive its first shipment of COVID vaccines, Gov. Cuomo demonstrated just how the doses will be delivered and administered across the state.

The governor made a joke about Christmas and grinned Thursday as he opened a mock-up box packed with dry ice, vials and trays to show how a soon-to-be approved vaccine from drug giant Pfizer will make its way to the Empire State.

“It’s real and they are being manufactured and they are going to be shipped,” Cuomo as he held a vial in his hand during a press briefing in Albany. “We are working very hard to be ready for the distribution and training people.”

“This is the weapon that is going to win the war,” he added.

An initial shipment of 170,000 doses of the Pfizer vaccine is expected to arrive in the state by Dec. 15. Doses will first be made available to nursing home residents and workers.

The box Cuomo unpacked as if he were a teen with a Youtube channel contained an electronic device that can track its location and records the internal temperature.

Dry-ice packed into the container needs to be switched out every five days to maintain the proper “ultra-cold” storage temperature.

Glass vials are held on trays within the box and each tiny bottle contains five doses, according to the governor. The trays, five to a box, hold 195 vials. Before being administered the doses need to go through a complex process that includes being defrosted and mixed with a diluting solution.

Cuomo, recently awarded an Emmy for his COVID-19 briefings, has commonly utilized props to get his messages across amid the coronavirus crisis. He has displayed a foam mountain meant to symbolize the state’s struggles as infections surged in the spring, a pandemic-themed poster and a massive collage of masks.

While the governor said inoculations are a light at the end of the tunnel, he cautioned that it will take time to distribute the doses and provide enough for the general public.

“It’s not tomorrow, it’s not a short tunnel,” he said.

Coronavirus cases continue to rise across the state, leading to an uptick in hospitalizations, something that Cuomo warned will be the biggest challenge in the coming months.

There are currently 4,063 New Yorkers hospitalized with the virus, including 783 in intensive care units. The state has 53,000 hospital beds in total.

The state reported the results of 203,440 on Wednesday with 4.49% coming back positive as another 61 New Yorkers died of the virus.

The governor also encouraged Washington to pass a COVID-19 relief bill as lawmakers in the nation’s capital restart talks about a $908 billion proposal that appears to have bipartisan support.

“We need help desperately, and something is better than nothing,” Cuomo said. “I urge them to get something done before they leave for Christmas. Families will not have a holiday if they don’t act, and if there’s no aid, but it’s a first down payment — it doesn’t come near to the need.

“It’s not nearly what the governors asked for in this country, but again something is better than nothing and we would support a first down payment bill,” he added.

The governor also announced an executive order extending and expanding eligibility for a rent relief program that relies on funds from the federal CARES Act.

The program, created by a law passed by the Legislature, appropriated up to $100 million for tenants who lost income due to the pandemic. The strict parameters of the law led to only $40 million being paid out. is expected to be paid to eligible applicants approximately 15,000 New York households.

Cuomo said he spoke to legislative leaders about amending the measure to reopen the application window and extending the eligibility requirements to “help more New Yorkers.”