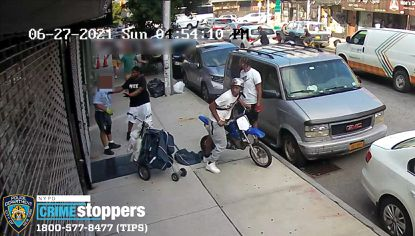 A postal worker delivering mail in Brooklyn was pummeled by a group of menacing dirt bike riders, leaving him with a fractured face, startling video released Wednesday shows.

The 57-year-old victim was pushing his mail cart across the street at McGuinness Blvd. and Nassau Ave. in Greenpoint about 6 p.m. Monday when he was surrounded by the riders, who drove circles around him, sparking a conflict.

Moments later, as the mailman walked up the block on the sidewalk, one of the riders rode up behind him. The mailman spun around, raising a fist, and the dirt bike rider started throwing punches, surveillance video released by cops shows.

The victim and rider duked it out on the sidewalk, dancing around each other and throwing multiple haymakers.

The dirt bike rider got several kicks in before he was joined by another rider, who pulled up on his bike dressed nearly identically in gray shorts, a white T-shirt, white sneakers and helmet with a black satchel across his chest, the video shows. The two men ganged up on the victim, cornering him against a storefront as they both pummeled him in the face.

Two men then ran over and one put his hands on one of the assailants, pulling him away from the victim and finally defusing the attack.

Medics took the victim to Woodhull Medical Center, where he was treated for broken facial bones and cuts to his face.

His attackers rode off and have not been caught. Cops are asking the public’s help identifying them and tracking them down.