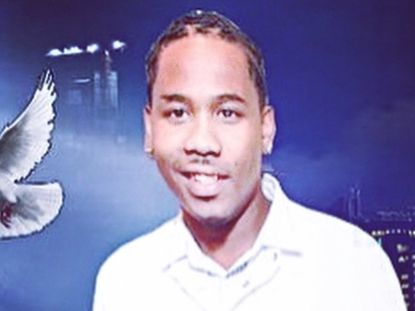 He was shot in the hand — and watched as his friend, Angasha Sharras, died when a bullet struck him in the head.

Now Brian Wollery says he again fears the shooter — whose murder conviction was tossed this week by a panel of state Appellate Division judges who said the Bronx District Attorney’s office should not have taken six years to bring the suspect to trial.

“I’m devastated because this guy is really a bad person that they need to get off the street,” Wollery told reporters of the suspect, Mark McDonald, 43.

McDonald, who was sentenced to 23 years to life, was released from state prison this week. He is now in federal custody awaiting deportation to Jamaica.

“If he is deported he may become stronger, because the system in Jamaica is terrible,” said Wollery, 43.

“I’m telling you that this guy is going to come back here,” Sherras told The News. “Deporting him to Jamaica is like letting him go free. He will come back.”

McDonald was charged in the Jan. 14, 2011 murder of Angasha Sharras, 29, near an afterhours club in the Williamsbridge section of the Bronx. The slain man was looking forward to the birth of a daughter when he was gunned down.

Nathaniel Sharras says his brother died because he stood up to McDonald, who had been extorting him “to supply him with weed and money.”

“It came to a point where my brother said, ‘This isn’t working out,’” he said.

“My brother, being fearless, told him, ‘I’m not doing it anymore,’ and (McDonald) went and got a gun and that’s how my brother lost his life. My brother got up and said ‘I’ll be right back’ and I never saw him alive again.”

Wollery said he tried to stop the shooting.

“I lunged for the guy, but he was already in a firing motion,” he recounted. “I was immediately in front of the gun, and both bullets went through my fingers and palm and hit Angasha on the left side of his head and in the neck.”

McDonald fled the scene, and was arrested several days later.

He was charged in 2011 with second-degree murder, first-degree assault and weapon possession during the term of former Bronx DA Robert Johnson. The case went to trial in Bronx Supreme Court in January 2017, about a year after the current DA Darcel Clark took office.

McDonald was convicted at a jury trial.

On Tuesday, the three-judge state Appellate Division panel overturned and dismissed the conviction because it found the DA had “no good cause” to violate McDonald’s constitutional right to a speedy trial for six years.

“This was a relatively simple case that did not warrant such an extraordinary delay in bringing defendant to trial,” the judges wrote.

In hearing after hearing from 2011 through July 2014, an assistant district attorney said he was “not ready” for trial, court filings show.

A new prosecutor was assigned and continued a similar pattern until the trial finally began in 2017.

“The reason it took the DA six years to try was because one DA retired and the other one had to start from scratch and cops had retired,” Nathaniel Sharras said. “Of course that’s frustrating to me.”

The DA’s office argued in court filings that the delay was immaterial since evidence of McDonald’s guilt was “overwhelming.” Prosecutors also said a key detective retired and a witness stopped cooperating. But the appeals panel rejected those arguments.

“The (DA’s office) made a mistake,” said Sharras’ sister, a 38-year-old city employee who requested her name not be used.

“But it’s the family who suffered the loss and is now once again a victim,” the sister said. “It’s very unfair. We’re not OK with it.”

The dead man’s sister said she’s furious that the DA’s office did not notify the family of the appellate court’s decision.

“It’s worrisome that he made it all the way to a release date without anyone contacting anyone in my family,” said the sister. “Isn’t it the DA’s office responsibility to keep us informed? I haven’t moved, and no phone numbers have changed.”

Patrice O’Shaughnessy, a spokeswoman for the DA’s office, did not respond to questions Thursday.

Angasha Sharras was laid to rest at a cemetery in Valhalla, N.Y. He had been planning to start a truck shipping business.

“People loved and respected my brother,” Nathaniel Sharras said. “His daughter is now 10 or 11. He never got to see his daughter’s face.”

Sharras, 41, works as a porter at a nursing home. He said the events around his brother’s death seem like yesterday.

Wollery still suffers from the physical injuries caused by the shooting.

“The bullets severed my ring finger and pinkie finger on my right hand,” he said. “Just picturing that sight at the moment right now is causing me a lot of grief.”

“I gave my statement bluntly and I did what I could to help the DA’s office. I had seen him several times before in the vicinity. He was a known figure.”

Now he wonders if having testified against McDonald again puts him in danger.

“Why did they overturn such a case that involved such a gruesome murder?” Wollery asked. “I’m fearing for my family’s life because they assured me that this guy would be in prison for 23 years.”