Black realtor, clients sue Michigan city after they were mistakenly handcuffed by police during showing 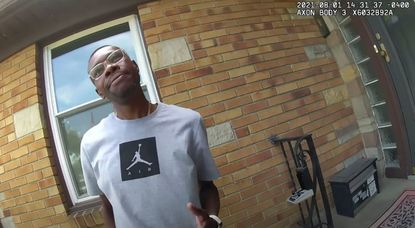 A Black man, his 15-year-old son, and their real estate agent have filed a federal lawsuit against the city of Wyoming, Michigan and its police department after they were mistakenly handcuffed during a home showing earlier this year.

The episode happened on Aug. 1, when Eric Brown was showing a house to Roy Thorne and his son, referred to as S.T. in court papers.

According to the lawsuit, which was filed Oct. 1 in U.S. District Court for the Western District of Michigan, when Brown was inside the home with his clients, a neighbor called 911 saying that “an alleged squatter, a young Black man, who had been arrested on July 24, 2021 had returned” to the home.

Shortly after the call, officers entered the house and ordered the three men to come out of the home, with their hands up, before handcuffing them.

“I knew once they surrounded the home they were preparing for a standoff,” Thorne told CNN’s Don Lemon at the time. “And so my instincts told me we need to get out of here, we need to get to where they can see that we’re not a threat.”

Police said they only removed their handcuffs when Brown showed them his real estate license.

On Aug. 3, Wyoming Public Safety said that race had not played a part in the incident.

“While it is unfortunate that innocent individuals were placed in handcuffs, our officers responded reasonably and according to department policy based on the information available to them at the time,” Wyoming Department of Public Safety Capt. Timothy Pols said at the time.

“It absolutely was implicit, racist bias, absolutely. And the city of Wyoming needs to step up, admit it and they need to be evaluated to see what training that they’re giving their officers,” he said, according to local television station WWMT.

The lawsuit alleges unlawful detainment and excessive force, racial profiling, assault and battery, false imprisonment, and intentional infliction of emotional distress. It names the city of Wyoming, its police chief, and six other police officers as defendants.