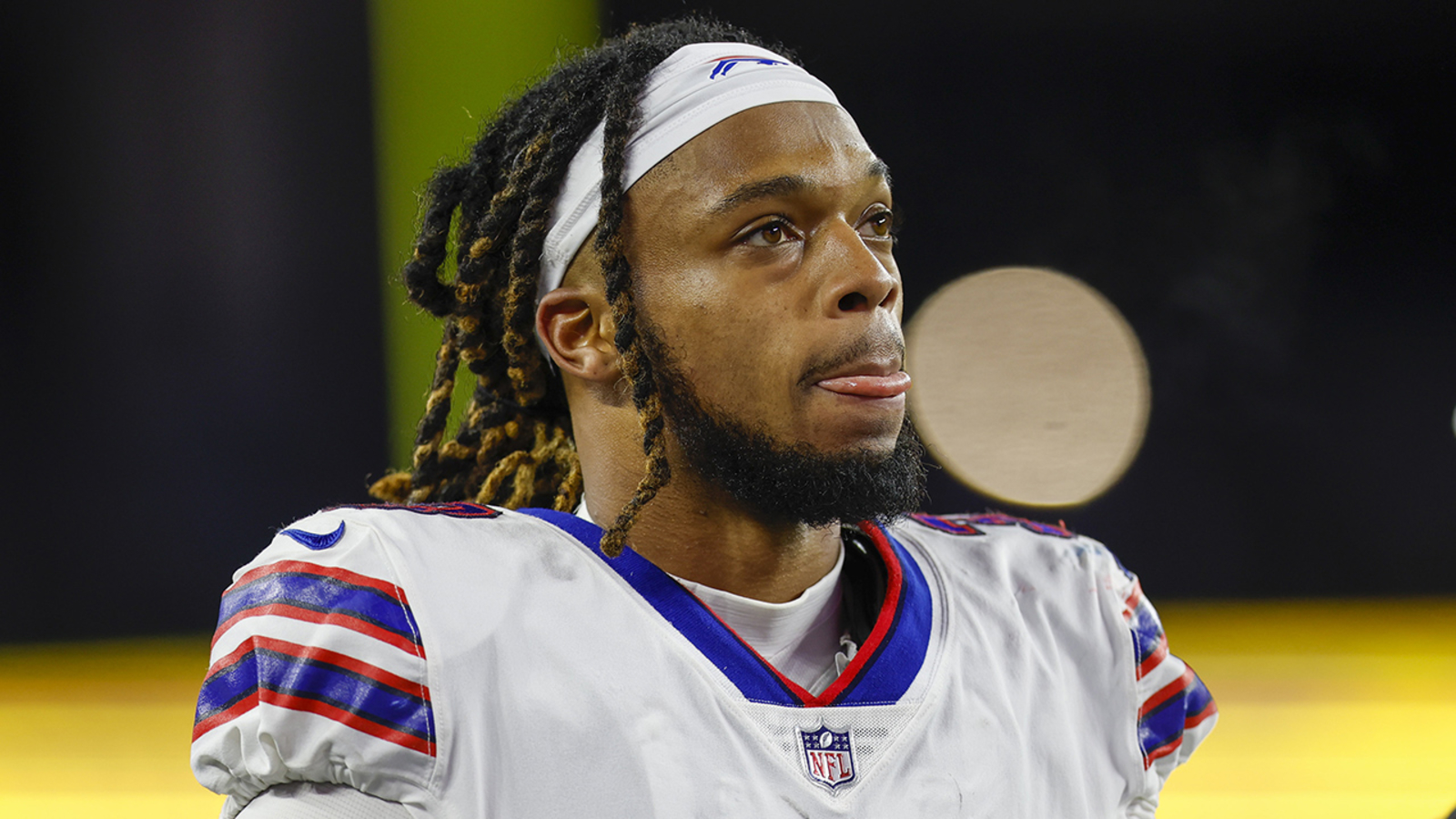 After suffering a cardiac arrest mid-game on Monday, Buffalo Bills safety Damar Hamlin remains sedated on a ventilator as doctors work toward getting him to breathe on his own, his uncle said, while uneasy supporters across the nation await word of his fate.

The 24-year-old player still was in critical condition Tuesday night, his uncle Dorrian Glenn told CNN, after his collapse on the field the prior night halted the Bills game against the Cincinnati Bengals, stunning a packed stadium that had only moments earlier been rippling with excitement over the catch and run ahead of Hamlin’s tackle of a Bengals wide receiver.

But, on Wednesday morning, Hamlin family spokesperson Jordon Rooney said loved ones were told by doctors Hamlin’s condition is moving in a “positive direction.”

In just seconds, medical personnel were rushing onto the field to administer CPR and resuscitate Hamlin in front of his teammates, many of whom fell to their knees, sent up a prayer or were openly weeping and embracing one another.

Bills safety Damar Hamlin remained down on the field after a scary hit.

According to the broadcast, medical personnel have administered CPR. pic.twitter.com/JKCWmfzaLT

“I’m not a crier, but I’ve never cried so hard in my life. Just to know, like, my nephew basically died on the field and they brought him back to life,” Glenn said.

Glenn was watching the game in Pittsburgh along with Hamlin’s youngest brother, and said everyone thought at first it was just a normal hit and that he would pop back up, take a couple plays off and come back. When 10-20 minutes had passed, they knew it was something serious.

Glenn said he tried to console Hamlin’s 7-year-old brother, telling him it would be all right, but soon it was apparent it might not be all right.

Once the game was cancelled, the family loaded up in two cars and drove from Pittsburgh to Cincinnati to support Hamlin.

Glenn said Hamlin is still fighting, and the family appreciates the prayers from all over the world.

He said he had a chance to see Hamlin, but turned around because he didn’t want to see him in that condition and will wait to see him when he can actually talk to him.

Hamlin is on a ventilator to relieve some of the strain on his lungs, which have been damaged, according to Glenn. The doctors told Glenn his nephew has also been “flipped over on his stomach” in the hospital to help with the blood on his lungs, he said, adding, “It seems like he’s trending upwards in a positive way.”

The game was suspended with nearly six minutes left in the first quarter and was later officially postponed. It will not be resumed this week, and no decision has been made on whether to continue it at a later date, the NFL said Tuesday.

The #Bengals–#Bills game game will not be resumed this week.pic.twitter.com/Jz7Spi54sh

On-field injuries are not uncommon in the league, which often resumes play even after severe cases. But several current and former players have said Hamlin’s cardiac arrest felt especially disturbing as medical personnel fought to save his life while fans and players looked on.

Bills offensive tackle Dion Dawkins realized the gravity of his teammate’s condition when Hamlin stayed on the ground as more and more medical staff were called over, he said.

“In that moment, you’re just thinking like, ‘What can I do? What can we do?’ And it just immediately breaks you down into prayer,” Dawkins told CNN’s Wolf Blitzer on Tuesday. “Whether you’re a believer or not, only a higher power can really take control of what is next. And our people that help also assisted that higher power.”

Hamlin’s collapse marks the latest in a series of tragic blows for the players and Buffalo community, which in the past few months has endured a racist mass shooting and a historic blizzard that left at least 41 people dead in Erie County, New York. “It has been, you know, just [a] constant beating for Buffalo,” Dawkins said.

A swell of support has surrounded Hamlin and his family as messages of prayers and well wishes have flooded in from star athletes, fans and national leaders. A fundraiser that Hamlin previously had started for his Chasing M’s Foundation toy drive has raised more than $6 million since his hospitalization.

At a prayer service for the player Tuesday night, community members described the heartbreak of watching “one of our own” endure such a crisis.

“All you can do right now is pray for Damar. The man, not the football player, not the Buffalo Bill, but the person. He has to pull through,” the city’s poet laureate Jillian Hanesworth said.

What doctors may be thinking

It is still unclear what led to Hamlin’s cardiac arrest — a condition that results from electrical disturbances that cause the heart to suddenly stop beating properly. Death can occur quickly if help isn’t rendered immediately. It is not the same as a heart attack or heart failure.

When the heart is not beating well, fluid can sometimes back up into the lungs and make it hard for medical staff to oxygenate the patient, CNN Chief Medical Correspondent Dr. Sanjay Gupta explained. So, they will flip the person on their stomach into a prone position to make breathing easier.

It sounds like Hamlin is still having a significant amount of cardiac dysfunction and his heart cannot pump enough blood, Gupta said.

One of the treatment options is to decrease the body’s demand for oxygenated blood, he told CNN’s Anderson Cooper on Tuesday.

“So, you want to improve the amount of circulation, but in the interim, you can also decrease the demand by sedating somebody, by keeping them on a breathing machine,” he said. “Sometimes they’ll even use cooling agents, hypothermia it’s called, to basically almost put the body in more of a hibernation-like state so it’s not demanding as much oxygenated blood. That’s part of the reason he would be on a breathing machine as well.”

“On behalf of our family, we want to express our sincere gratitude for the love and support shown to Damar during this challenging time. We are deeply moved by the prayers, kind words, and donations from fans around the country,” its statement said.

‘This is a brutal sport. I think people forget that’

Several star athletes — including tennis player Coco Gauff, the NFL’s JJ Watt and NBA legend LeBron James — have applauded the NFL’s decision to postpone the game and have emphasized the importance of Hamlin’s safe recovery over the game’s outcome

Former NFL player Donté Stallworth said the league’s decision to postpone the game wouldn’t have happened years ago. “Five, 10 years ago, the game probably would have resumed,” he told CNN’s Jim Sciutto on Tuesday.

“I don’t know if you can make the game any much safer,” he said. “This is a brutal sport. I think people forget that. They look at players more as commodities sometimes, especially with fantasy football.

“Sometimes we forget the human side, that these players are actually human beings and they have families and they have wives and kids,” he added, pointing out that Hamlin’s “mother was there witnessing this with her own eyes.”

Dawkins was relieved and grateful that his team did not have to continue playing, he said.

“The fact that we did not have to go back out there on that field and play just shows that there is care, and that’s all we can ever ask for is that we get treated as people,” he said. “Because most people just treat us as athletes, as superstars, and some people like celebrities, but in that moment they treated us like people.”

The continued shock of Hamlin’s hospitalization — on top of the city’s mass shooting in May, deadly December blizzard, having a home game in November moved to Detroit and getting stuck in Chicago during the holidays — has been heavy on everyone associated with the club, the source said.

“Everyone is exhausted,” the source told Wire, adding that the team’s flight back to New York didn’t land until 3:30 a.m. ET on Tuesday.