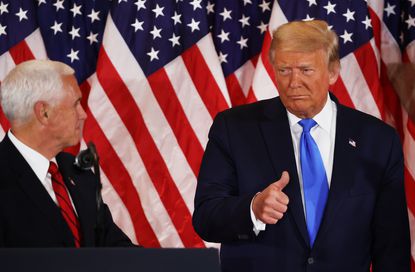 Vice President Mike Pence is being put to the ultimate Trump test.

The Republican president falsely claimed Tuesday that Pence can single-handedly toss out election results when Congress convenes on Wednesday for the final bureaucratic step before Joe Biden’s inauguration, putting pressure on the VP to decide what’s more important: The boss or the Constitution.

“The Vice President has the power to reject fraudulently chosen electors,” Trump tweeted in an inaccurate nudge for Pence to overstep his authority when the House and Senate meet Wednesday to count and certify the Electoral College votes.

Pence, who has throughout Trump’s presidency acted as his most consistently loyal right-hand man, stayed conspicuously mum Tuesday about his plans for the congressional count, over which he will preside.

At a Monday rally for the Republican candidates in Georgia’s critical Senate runoffs, Pence gave a vague pledge about his intentions.

“I promise you this: On Wednesday, we’ll have our day in Congress,” Pence told conservatives at a mega-church in northwestern Georgia.

“The vice president is essentially powerless tomorrow. The Constitution gives him a merely ceremonial role, and there’s no way he can turn that into anything more,” Laurence Tribe, a longtime constitutional law professor at Harvard University, told the Daily News.

In serving as the presiding officer over Wednesday’s session, Pence’s duties are essentially limited to presenting the 538 electoral votes certified by all 50 states and Washington, D.C., for a formal count, as spelled out by the 12th Amendment to the Constitution.

He’s also tasked with overseeing any challenges to the results requested by members of Congress.

If a challenge is made and supported by at least one representative and one senator, Pence should order the House and Senate to retreat to their respective chambers for a debate and vote on the objection.

For a challenge to be successful, majorities of both chambers have to vote to sustain it — which is virtually impossible since the House is controlled by Democrats and Senate GOP leaders have instructed their members to not entertain objections to Biden’s certified victory.

At no point can Pence play a decisive role in whether or not slates of electoral votes should be thrown out.

But that hasn’t stopped Trump and some of his most extreme allies from suggesting that he should.

“I hope that our great vice president comes through for us. He’s a great guy. Of course, if he doesn’t come through, I won’t like him quite as much,” Trump said at a Monday night rally in Georgia.

Trump’s last-ditch attempt to get Pence to do his dirty work is centered around the false claim that Biden’s decisive election was facilitated by mass voter fraud. Republican and Democratic election officials from across the country as well as courts and Trump’s own top officials, including former Attorney General William Barr, have concluded there is no evidence to back up the outgoing president’s paranoid fraud fretting.

Nonetheless, a phalanx of Trump-loyal representatives and senators are gearing up to object to election results in several states on Wednesday despite a total lack of evidence of widespread irregularities.

Some of the most conservative members of the House, such as Reps. Louie Gohmert (R-Texas) and Mo Brooks (R-Ala.), are vowing to protest results in as many as six states — Arizona, Georgia, Nevada, Michigan, Pennsylvania and Wisconsin.

It’s unclear if there will be senators who sign on to all of those challenges.

Sens. Josh Hawley (R-Mo.) and Ted Cruz (R-Texas) are spearheading efforts to sign onto challenges against the results in Pennsylvania and Arizona respectively, ensuring separate debates and votes on those two states’ results at least.

The Arizona objection is likely to be considered first, as Pence is supposed to read out the states’ results in alphabetical order.

Outside of the U.S. Capitol, Trump is egging on his most extreme supporters to gather for a large protest. Violent far-right groups like the so-called Proud Boys are expected to attend.

“Washington is being inundated with people who don’t want to see an election victory stolen,” Trump tweeted. “Our Country has had enough, they won’t take it anymore! We hear you (and love you) from the Oval Office.”

The president also plans to speak at a Wednesday morning rally at the White House ellipse ahead of the congressional session.

Inside the Capitol, the debates are likely to get heated, as Republicans press their fact-challenged fraud case and delay the certification of Biden’s victory.

By the end of what’s likely to be a long day, though, Biden’s 306-232 Electoral College victory is expected to be affirmed. Biden will then be inaugurated as the 46th president on Jan. 20.