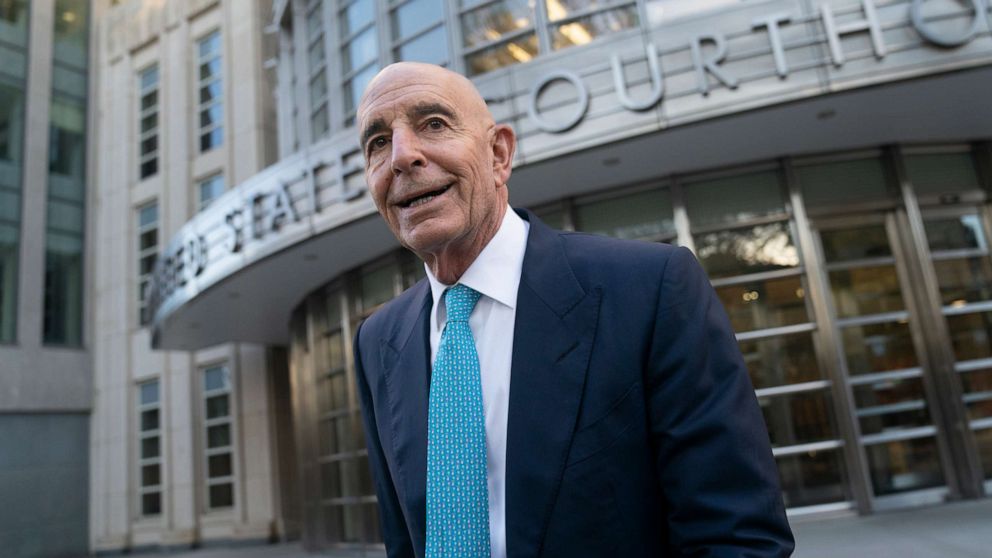 Tom Barrack, a longtime ally of former President Donald Trump and his one-time inaugural committee chairman, was found not guilty on Friday of illegal foreign lobbying charges, a defeat for federal prosecutors in Brooklyn who accused the billionaire businessman of improperly acting as a foreign agent on behalf of the United Arab Emirates.

After a trial that stretched nearly two months and saw testimony from two former Trump administration officials, a jury of five men and seven women reached the verdict after deliberating over three days.

Barrack was acquitted on all charges, which included conspiracy, obstruction, and lying to the FBI.

“God bless America. The system works,” Barrack said outside the courthouse following his acquittal. “I am humbled. The system is amazing, the people are amazing, I have no hostility.”

Asked by ABC News about his criticism of Trump during the trial, in which he said that his support of the former president was ultimately “disastrous” for his work, Barrack replied, “I root for all of them — it’s the toughest job in the world to be president of the United States.”

Matthew Grimes, Barrack’s aide at his real estate firm who was charged alongside Barrack, was also acquitted.

“The word is clichéd, but I just feel grateful,” Grimes said outside the courthouse.

Trump himself hailed the acquittals in a statement, saying, “Great news for our Country, Freedom, and Democracy in that businessman Tom Barrack, who should have never been charged or tried, was just acquitted of all charges.”

“My great respect goes out to the jurors for their courage and understanding in coming to an absolutely correct decision,” Trump said, before calling for the release of those convicted of attacking the U.S. Capitol on Jan. 6, 2021.

The Justice Department accused Barrack, 75, of illegally lobbying the Trump campaign and the early days of the administration while acting as a foreign agent for the UAE from 2016 to 2018 and failing to register with Justice Department as required by law.

Prosecutors also accused Barrack of lying to federal investigators when they questioned him about his ties to the UAE in 2019.

The high-profile case offered a glimpse into the workings of Trump’s inner circle during the 2016 campaign and the early days of his administration, and featured a star-studded cast of witnesses. Two former Trump administration cabinet officials, Treasury Secretary Steven Mnuchin and Secretary of State Rex Tillerson, testified during the trial.

Ryan Harris, a federal prosecutor, argued during closing statements that Barrack had attempted to “leverage his access” to Trump with his UAE contacts as part of an effort to enrich himself and his real-estate investment firm, which attracted large sums of money from the Emirati sovereign wealth fund around the time of Trump’s arrival in the White House.

In his closing arguments, Randall Jackson, a lawyer for Barrack, urged jurors to see through the government’s case, citing what he described as a “total lack of evidence.”

Barrack himself took the stand in his own defense for six days to defend himself against each of the charges against him. He spent hours explaining to the jury his longstanding business ties to UAE and how he sought to broker a relationship with the Trump campaign and the Middle East.

“I thought that was actually a great thing,” Barrack said of his efforts. “The idea of having somebody that had knowledge in both confused arenas that could create some web of understanding and tolerance is what I know we all needed.”

He laughed when asked by his attorney about the government’s allegation that he was working to “manipulate the public” and “spread UAE propaganda.”

“Not at all,” Barrack said.

“I talked to President Trump about it, and he said, ‘You do the right thing,'” Barrack testified.