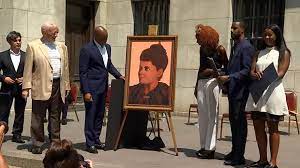 A new portrait was unveiled in Brooklyn in honor of the late Civil Rights icon and journalist Ida B. Wells.

Wells was a pioneering Black activist and journalist who fought for an end to segregation and documented the horrors of lynching.

“My great-grandmother Ida B. Wells was an astounding woman who overcame her fear for what was right even if it meant giving her life, I am proud to see her life of sacrifice and courage honored with the unveiling and inclusion of this gorgeous portrait on these hallowed walls,” Joshua Duster said.

Wells, who was born a slave in 1862 in Mississippi, was a 30-year-old newspaper editor in Memphis, Tennessee, when she began her campaign against lynching. Wells’ crusade was prompted by the 1892 lynching of a man whose first child was her godchild. She traveled the South over several months interviewing witnesses and reading reports of similar events, which she published in the newspaper she co-owned and edited, The Memphis Free Speech and Headlight.

In 2020, Wells was awarded a posthumous Pulitzer Prize for her reporting on the lynching of African Americans.

Her portrait was created by artist Jacob K. Morris.