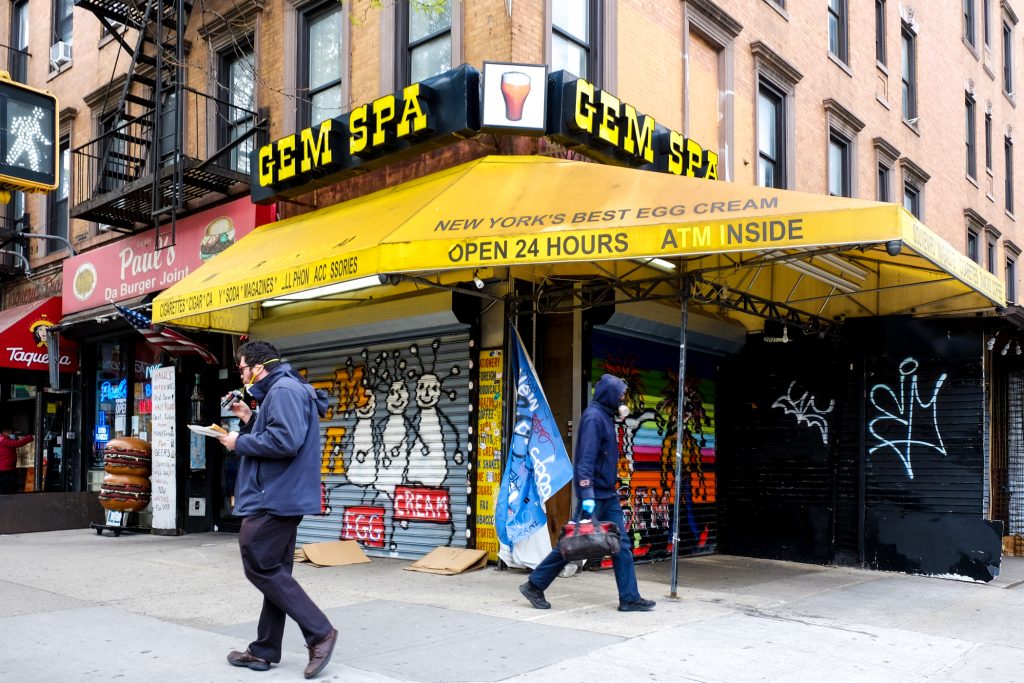 The East Village’s Gem Spa is one of the many New York City businesses that couldn’t survive the coronavirus pandemic.

“It is with a heavy heart that we announce Gem Spa has poured its last legendary egg cream and closed its doors forever,” wrote owner Parul Patel in a social media post last week. She who took the reins from her father Ray who took ownership in 1985.

Gem Spa opened in the 1920s under another name, and received its current name in 1957.

A cornerstone in the East Village at the corner of East 8th Street at Second Avenue, on the ground floor of a  five-story tenement built between 1899-1900, this newsstand/candy store sold papers and magazines, snacks, drinks, toiletries, sunglasses and hats.

In 1966, the Village Voice called it the official oasis of the East Village. It was famous for its egg creams.

More recently, Gem Spa tread the difficult economics of changing demographics and gentrifying real estate with particular pressure from the landlord. COVID-19 was the last straw.

Initially trying a take-out and delivery model during the “New York PAUSE,” Rupel ultimately closed shop hoping to reopen — up until last week.

“Prior to the crisis, it had become increasingly apparent that the evolving character of the area was no longer able to sustain a corner creation like ours,” she said in her statement to neighbors and fans.
“Coronavirus concerns closed our city, cratered businesses, and ultimately sealed the fate of our (close to) 100-year-old shop.”

Long-time East Village resident actress Barbara Bova recalled how decades back, the neighborhood streets at night could be frightening, but the 24-hour corner shop served as a safety sanctuary to duck into if one felt at risk.  She admitted it’s been a while since she’s been in there.

Photographer David Godlis has a more varied and ongoing relationship with his corner store.

“It’s always been there,” said Godlis who moved to the East Village around 1976. “I’d buy New Musical Express and Mojo Magazine there and follow the U.K. punk bands. They always had them,” he said of his patronage and the magazines Gem Spa carried from the 70s through the 90s.

“I always bought my Sunday Times there,” he added. “People started subscribing to magazines and that business dropped.” Carrying periodicals because unprofitable for Gem Spa as a result.

In the last few years, Patel noticed “patrons” who seemed out-of-place showing up The shop was busted for selling cigarettes to a minor and lost its license. There were monies owed to the New York Lottery, and that operation stopped. The revenue stream shrank further.

Almost beyond life support last year, the neighborhood rallied. There was an art show and other promotions to generate income. Patel began trying various ideas to transform the business —merchandizing, selling postcards and images of Gem Spa as a backdrop to some celebrities.  Patel put in a new counter and some stools.  She was trying to make it — but the margin was very narrow.

Yet the shop faced unknowns about when they could reopen, and they have a $35,000 settlement due for back and current rent and taxes — with the threat of eviction looming overhead.

Thanking their public, the Patel family wished everyone good health, to stay safe, and sent their love to all.

“We are, and always will be, eternally grateful to the historical artists, musicians, designers and dedicated denizen’s who saw us as much more than a beloved bodega but an iconic East Village institution,” she wrote.

Patel added that the website will highlight the Gem Spa history and iconic figures that passed through and will continue to sell Gem Spa branded merchandise as well as art, books and photographs inspired by the store.

As for Godlis, “It’s another level of hurt.”

He spoke about the northeast corner of 3rd Street and St. Mark’s Place, where four buildings were recently razed for another huge construction project, saying that it felt like “an amputation” in the neighborhood.

And on the south side of St. Mark’s Place, he rattled off the other iconic stores that once thrived between 2nd and 3rd Avenues and are now gone: Trash and Vaudeville, Dojo, and Sounds.

“Gem Spa was the last man standing,” he lamented.