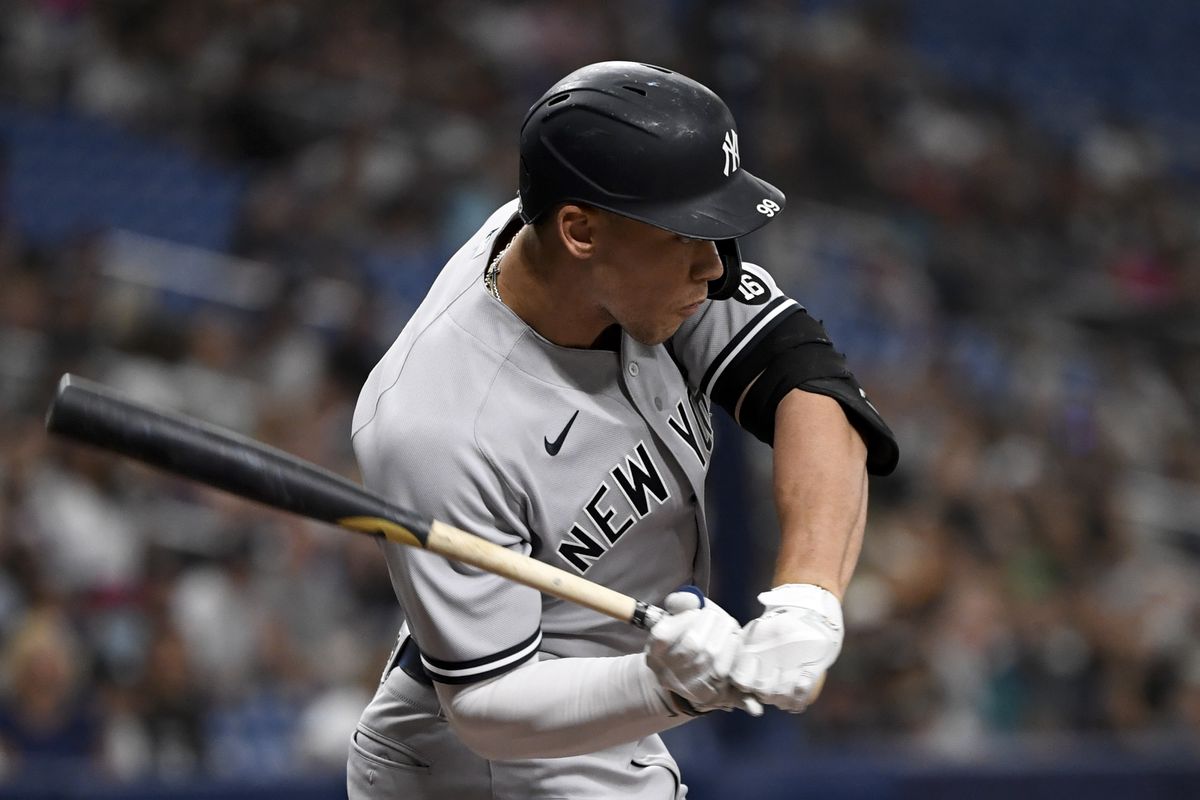 With the teams they will have to fight off for a playoff spot bulking up their rosters the past few days, the Yankees finally were making a move to improve their lineup, too. As the Yankees were on the field playing the Rays, the front office was nearing a deal to acquire Rangers’ outfielder Joey Gallo, an industry source said.

ESPN first reported the deal, which was expected to be finalized Thursday morning. The deal will also bring left-handed reliever Joely Rodriguez to the Yankees in exchange for four minor leaguers.

After beating the Rays 3-1 Wednesday night, Aaron Boone declined to comment on the pending trade.

The 27-year old power hitter has long been linked to the Yankees and he was the player most industry sources thought the Bombers would end up with before Friday’s 4 p.m. trade deadline.

“He hits ‘em a long way,” one talent evaluator said. “He also strikes out a lot. He gives them some balance, but I am not sure power was their biggest problem.”

His lefty bat does give them more balance.

Gallow is also not a rental. He is under team control through 2023 with another year of arbitration. He is making $6.2 million this season.

Late Tuesday night the Yankees started making room on the payroll to stay under the luxury tax threshold for a move like this. They sent Luis Cessa and Justin Wilson to the Red for a player to be named later. A Reds source said the return would be “nothing of consequence.”

Of course not, because the Reds had to take Justin Wilson, who the Yankees acquired after dumping Adam Ottavino’s salary on the Red Sox in January, and the remainder of his $2.8 million salary for this season and $2.3 million option for next season, just to get Cessa.[More Yankees] Aaron Judge scratched from Yankee lineup just one day after return from COVID-19 IL; team gives no explanation »

Cessa, who was in just his second year of arbitration, was making $1.05 million.

It seemed like an odd move, especially hampering the Yankees bullpen before a game they needed against the Rays to stay in the wild card mix.

With less than 48 hours to go until the Yankees can add a player for the playoffs, the teams that they will be battling for an American League wild card spot down the stretch have made moves to improve. The Rays went out and landed Nelson Cruz. The A’s bolstered their bullpen on Tuesday by adding Andrew Chafin and then on Wednesday they pulled the trigger on a deal that brought in Starling Marte from the Marlins. The Mariners added starter Tyler Andersen and traded their closer for young infield help in Abraham Toro.

Yankees manager Aaron Boone said it was hard to say goodbye to players like Cessa and Wilson, but he tries to block out the outside noise this time of year.

“He keeps me abreast of if he’s talking to someone about a certain player, he gives me a little bit of heads up, but I don’t get that involved, honestly, in it,” Boone said of what the Yankees are working on before the Friday deadline. “I’m touching base with him usually a few times a day, whether it’s things related to our club now or different things that they’re discussing.

“As for what I hope, I don’t know,” Boone said. “Hopefully we’re in a little better place moving forward. But whatever it is, we also know we have the players and the confidence in those players in that room to have a special run here.”

According to three scouts from teams that have or will face the Yankees this season, the Gallo move was expected and doesn’t drastically change this team.

“It gives them a power lefty bat, which they really needed, especially in their ballpark,” one scout said. “They obviously have other issues they need to address. We’ll see where they are on Friday.”

Cessa allowed 12 earned runs in 38.1 innings pitched in relief this season. He allowed two home runs and struck out 31 in 29 appearances. The 29-year old had four saves and pitched to a 4.19 ERA over parts of five seasons with the Yankees, who acquired him from the Tigers along with Chad Green, for, ironically, Justin Wilson in December 2015.

WIlson’s second tenure with the Yankees was not as good as the first. He went 1-1 with a 7.50 ERA in 18 innings pitched over 21 appearances.