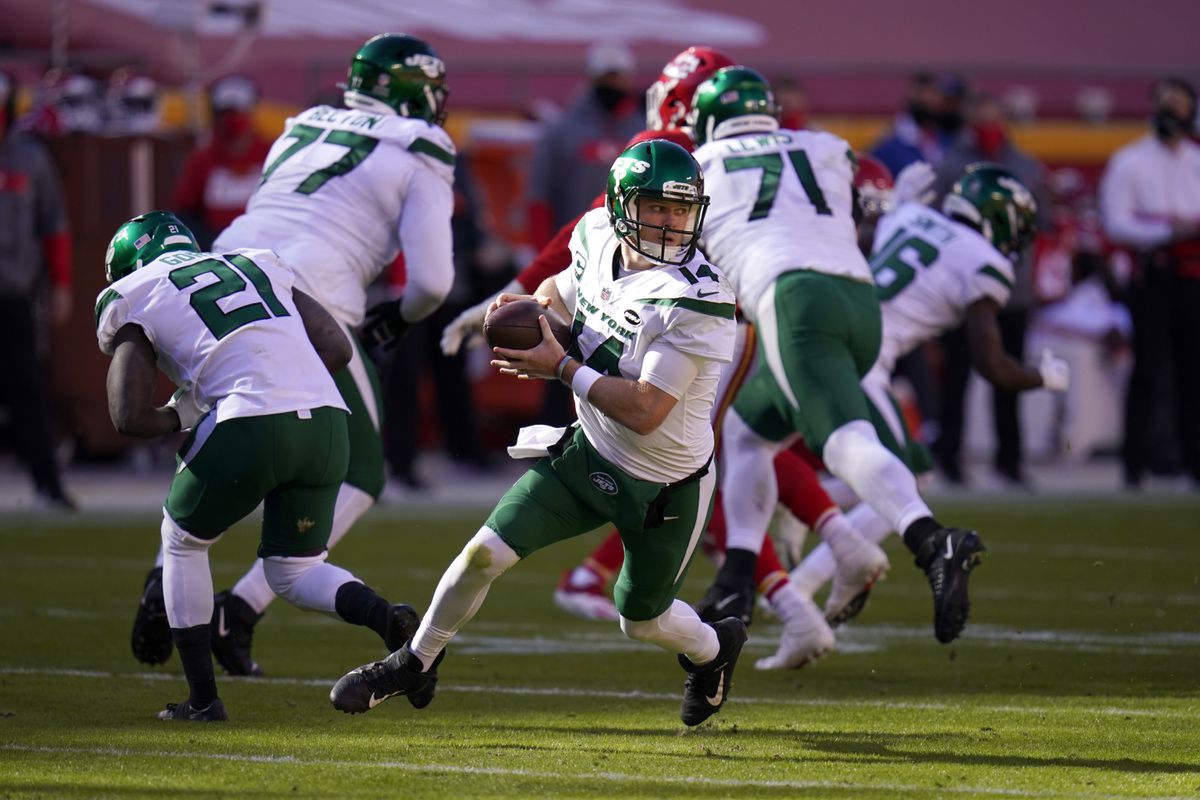 This is what you hear all the time about Trevor Lawrence, when you hear why he won’t run the other way from the Jets even as lousy as their ownership is and as badly coached as they are right now, and how there is no guarantee that Joe Douglas is going to be anything more than their latest failed general manager:

Well, yeah, but it’s New York, whether the Jets play across the river or not.

No way Lawrence takes a hard pass on New York.

Oh, sure. New York is supposed to end the discussion, or the debate, or the argument, simply because it is New York and there was a time when it used to feel like the capital of sports the way it was the capital of everything else. Trevor Lawrence, or so this extremely New York nationalist thinking goes, is going to want New York — if the Jets do end up with the No. 1 pick and they get the chance to draft Lawrence and the equally pathetic Jaguars don’t — the way Eli and the whole Manning family did after the Chargers drafted No. 10 and before they traded him to Ernie Accorsi.

But you know why Trevor might be having great and grave doubts about wanting to sign on with the New York Jets? Because he has to be watching what New York has done and is doing to Sam Darnold, someone I want very badly to get a game on Sunday against the Dolphins, and thus blow the Lawrence talk sky high. Not for the Jets, or even for their fans.

You saw what happened to Eli after he got here, what being a New York sports star did for him, whether he was actually an elite quarterback or not. You see now how Eli might ride two Super Bowl victories to the Hall of Fame someday the way Joe Namath rode his one, and the only one the Jets have ever won.

But New York can also do to young athletes what it’s in the process of doing to Darnold.

It’s doing this to Darnold even if it wasn’t so terribly long ago — it was actually last season — that Darnold was the quarterback of a Jets team that won six of its last eight games. And now? Here is what my pal, ESPN’s Mike Greenberg, as crazed a Jets fan as I know, tweeted on Friday morning:

“The idea that Sam Darnold is auditioning to remain the QB of the #Jets is so ludicrous it is actually insulting. This franchise has done everything imaginable to ruin his career. The best thing that could happen to him will be getting the hell out.”

He’s right, of course. He’s right, one hundred percent. Does that mean Darnold is what I thought he was going to be when the Jets took him with that third pick right after the Giants had taken Saquon Barkley at No. 2, even though they sure needed a quarterback at the time? It doesn’t. But guess what? Darnold did as much winning as a starting quarterback over the second half of last season than Daniel Jones has done in two seasons as the Giants starter.

But now everything has turned to sludge and Darnold has been hurt and the Jets can’t get a game, even though they might win one Sunday and really throw not just a monkey wrench but a whole hardware store into all the Trevor Lawrence talk. There is this huge rush to get Darnold out of here and Lawrence in here in Darnold’s third season in the pros, one that really hasn’t been a season at all. Greenberg is right: You know who wins if Darnold really is on his way out of here.

Darnold does. He would be the only one to actually win big with the 2020 New York Jets.

Of course there have been times in pro football, and recently, when a team dumped out of a first-round quarterback early, having made the determination that the quarterback wasn’t The Guy. The Cardinals absolutely did it with Josh Rosen of UCLA, even if they didn’t take him as high up as the Jets took USC’s Darnold. And because they dumped out of Rosen early, they were able to take Kyler Murray when they were the ones with the top pick in the draft, and look at them, and look at Murray, now. They matter again, the way the Jets are so desperate to matter again.

By the way? Kyler Murray is 23 years old. So is Sam Darnold. Only nobody will ever write stories about Murray and possible trade fits for him, the way those stories are now being written about 23-year-old Sam Darnold. Maybe the one who should have tried to force a trade after the Jets drafted him was Darnold.

Even Dave Brown, whom George Young took in the first round of the old Supplemental Draft back in 1992 (it doesn’t matter who the Giants general manager is, they’ve got a thing for Duke quarterbacks), got three full seasons as a starter before the Giants effectively moved on from him. Darnold will start his 23rd game for the Jets on Sunday against the Dolphins. He is working on his second head coach. The general manager of the team isn’t the general manager who drafted him. And tell me which of the skill-position players around him since he got to MetLife Stadium are on their way to Canton, Ohio, at least without low-price airfare.

Does that mean Darnold is still destined for stardom? Has he had a string of games like the ones Justin Herbert, who really is going to be a star, has had for the Chargers this season? He has not. But he probably wonders how things might have been different for him if he’d gotten to play for an offensive head coach like Kliff Kingsbury, Murray’s guy in Arizona.

So not even three full seasons later, as Trevor Lawrence is supposed to be drawn to the bright lights and the big city (even if he’ll be doing his practicing in Florham Park, N.J.), you see how well coming to New York worked out for Sam Darnold.

You know why New York might now be available to the kid from Clemson? Because the way it’s been eating Sam Darnold alive, that’s why. Now that I think of it, maybe I shouldn’t be rooting so hard for Darnold to get a win Sunday against Miami. If he gets one, he might have to stay.

And start talking about the players the recruiters are going to recruit next year.

This is the basketball version of Three-Card Monte.

There are all the other long-suffering fans in America.

Then there are Knick fans, once again being sold a season other than the one their team is about to play.

I’m just hoping they have more wins this season than they have assistant coaches, which is eight.

When I first started covering the Knicks, Red Holzman had one assistant:

One last thing about our kids on 33rd Street:

Jim Dolan’s team has had a cozy relationship with CAA for more than a decade.

How’s that worked out for him?

It took Aaron Rodgers until last season to get himself a coach worthy of his talents.

Before that, he had Mike McCarthy.

At the end of the season Ron Rivera — who has otherwise done such a tremendous job coaching the Washington Football Team — might regret that last-minute two-point conversion try against the Giants.

If Northwestern wins the Big Ten, do they make the Final Four of college football?

Asking for about 9,000 friends of mine in the business who went there.

So at what point do the Yankees stop thinking they’re just having a run of bad luck with these guys and start thinking they might not keep both of them on the field for a full season?

I really am thinking that it’s time for couples counseling with Bruce Arians and Tom Brady.

You know things haven’t really gone all that swimmingly for the Bears on offense this season if Mitch Trubisky is now viewed as some kind of savior.

I made more putts on Friday than Curry did on Friday.

No No. 1 college football team in recent memory has more flown under the radar — at least outside Tuscaloosa — than this year’s Alabama team.

Eighty years ago the Chicago beat Washington 73-0 in the NFL championship game.

Trump would have said they stole it from Washington, right?

Finally today, a birthday shout-out to our daughter, Hannah.

She’s our youngest, and she turned 22 on Wednesday, and is going to graduate from college in May.

I’ve joked before that even with three older brothers, she runs our family, on her way to what I’ve always suspected was her ultimate goal of world domination.

And for years I’ve said this about her on her birthday:

Boy oh boy, what a girl.

But she’s a young woman now, beautiful in all ways.