Trump rips McConnell as a ‘political hack,’ vows to back MAGA-inspired primary candidates 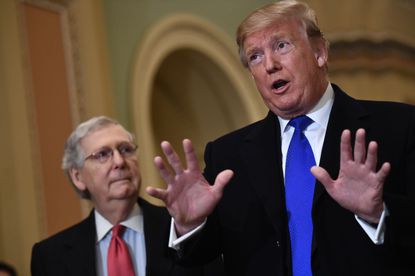 Civil war is breaking out in the Republican Party.

Donald Trump blasted Kentucky Sen. Mitch McConnell as a “third-rate” politician on Tuesday and vowed to support far-right candidates challenging establishment Republicans in the next midterm elections, pouring gasoline on the flames that have erupted within the party in the wake of the ex-president’s impeachment acquittal.

In a lengthy statement issued by his newly-formed super PAC, Trump laid blame squarely on McConnell for Republicans losing majority control of the Senate last month and trashed him for letting Democrats play him “like a fiddle.”

“Mitch is a dour, sullen and unsmiling political hack, and if Republican senators are going to stay with him, they will not win again,” said Trump, who has been holed up at his private Florida club without access to Twitter since leaving the White House on Jan. 20. “He will never do what needs to be done, or what is right for our country. Where necessary and appropriate, I will back primary rivals who espouse Making America Great Again and our policy of America First.”

Trump — who’s facing criminal investigations in New York and Georgia over his financial and political dealings — also attacked McConnell for doing “nothing” to clean up the 2020 “election disaster,” signaling he won’t back off his false claims about voter fraud despite his supporters’ deadly siege of the U.S. Capitol on Jan. 6.

“He doesn’t have what it takes, never did, and never will,” Trump said.

A spokesman for McConnell, the Senate’s Republican minority leader, did not return a request for comment.

But Kevin McLaughlin, a former Senate GOP leadership aide, said Trump was lying about at least one issue in his inflammatory statement.

“I personally showed Trump polling in the Oval Office that had (McConnell) up 20 points. He knows this isn’t true,” McLaughlin tweeted of Trump’s claim that the Kentucky Republican was floundering in the polls before he endorsed him ahead of his Nov. 3 reelection.

Trump’s defiant statement comes as McConnell’s seeking to purge the former president from the party.

Though he voted to acquit Trump during last week’s impeachment trial, McConnell said he only did so because he claims the Senate can’t convict ex-presidents and suggested the criminal justice system should deal with him instead.

“There’s no question — none — that President Trump is practically and morally responsible for provoking the events of the day,” McConnell said of the pro-Trump assault on the Capitol that left a police officer and four others dead. “We have a criminal justice system in this country. We have civil litigation. And former presidents are not immune from being accountable by either one.”