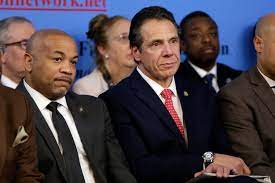 The state Assembly’s impeachment probe into Gov. Cuomo is going into overdrive.

Assembly Speaker Carl Heastie (D-Bronx) is fast-tracking its investigation into Cuomo in the wake of Attorney General James’ damning report detailing and corroborating sexual harassment allegations against the embattled governor.

After meeting with his members on Tuesday, Heastie said that “it is abundantly clear to me that the Governor has lost the confidence of the Assembly Democratic majority and that he can no longer remain in office.”

The chamber, which opened an impeachment probe into Cuomo back in March, is now moving to expedite its work, Heastie added.

Cuomo’s fellow Democrats, who control both the Assembly and the Senate, will decide his fate as the defiant third-term governor has so far refused to resign.

It could still be weeks before the Assembly concludes its investigation, which covers not only the misconduct claims, but scandalous accusations related to the Cuomo administration’s handling of the COVID crisis.

The Assembly Judiciary Committee announced in late June that it was preparing to issue subpoenas and granting Davis Polk, the independent law firm conducting the investigation, the ability to “act as a commission,” meaning lawyers have the authority to take “testimony from witnesses under oath.”

The process has been criticized for moving at a glacial pace as lawmakers and the firm investigate the harassment claims, Cuomo’s pandemic book deal, special access to COVID-19 testing and the obscuring of the true number of nursing home deaths.

Some of Cuomo’s accusers have also raised objections to the choice of Davis Polk citing ties to the administration.

Should articles of impeachment be drawn up, a simple majority vote in the Assembly would trigger a trial overseen by a combination of the Senate and the seven members of the state Court of Appeals.

Senate Majority Leader Andrea Stewart-Cousins (D-Yonkers), one of dozens of Dems who have called on Cuomo to resign, would not partake in the process, per the state Constitution. A two-thirds vote would then be needed to convict and remove Cuomo from office.

While several Empire State governors have resigned in disgrace, only one has been impeached. In 1913, William Sulzer was removed from office over accusations of campaign malfeasance related to a rift with the politically-powerful Tammany Hall.

Should Cuomo resign or be removed from office, Lt. Gov. Kathy Hochul, a longtime ally of the governor, would succeed him.

Hochul, who skipped a planned Harlem appearance Tuesday, called the conduct detailed in James’ report “repulsive and unlawful behavior” in a statement.

“No one is above the law,” she said. “Under the New York Constitution, the Assembly will now determine the next steps.

“Because Lieutenant Governors stand next in the line of succession, it would not be appropriate to comment further on the process at this moment,” she added.