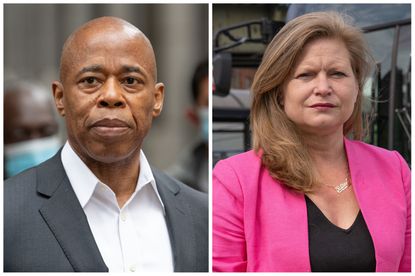 Eric Adams declared victory in the city’s Democratic mayoral race Tuesday after holding on to a razor-thin lead in a pivotal new tally of votes, putting him on track to become just the second Black mayor in Big Apple history after running a centrist campaign heavily focused on crime-fighting.

Adams, Brooklyn’s current borough president and a retired NYPD captain, led former sanitation commissioner Kathryn Garcia by just 8,426 ballots — or 1% of the total — after more than 120,000 absentee votes were added to the Board of Elections’ unofficial tally of ranked-choice results.

The Associated Press called the race for Adams after the absentee ballot drop. Even before the AP call, Adams, 60, took a long-awaited victory lap over the June 22 primary, which was marred by delays and embarrassing tabulation errors.

“The results are clear: an historic, diverse, five-borough coalition led by working-class New Yorkers has led us to victory in the Democratic primary for mayor of New York City,” Adams said in a statement. “Now we must focus on winning in November so that we can deliver on the promise of this great city for those who are struggling, who are underserved, and who are committed to a safe, fair, affordable future for all New Yorkers.”

Adams — who’d become the first African American mayor since David Dinkins if elected — will face long-shot Republican mayoral candidate Curtis Sliwa in the November general election. That race is widely expected to be a one-sided affair in deep-blue New York.

After serving in the NYPD for more than two decades, Adams — who used to be a registered Republican — was elected Brooklyn borough president in 2013.

He has long had his eyes on Gracie Mansion, and spent much of his energy on the campaign trail vowing to put a lid on a surge in shootings in the city while seeking to strike a balance by also touting his credentials as a police reformer during his time in the NYPD.

He’s a staunch opponent of the “Defund the Police” movement and clashed repeatedly with the progressive candidates in the mayoral field. He has also attracted controversy over the decades, including by defending Nation of Islam leader Louis Farrakhan.

Garcia, who campaigned as a problem solver with extensive experience in city politics, did not immediately offer public comment after the updated results.

When only in-person ballots were in the mix last week, Adams held a 14,755-vote lead over Garcia, meaning the ex-sanitation commissioner gained significant ground in the absentees.

However, the Board of Elections said less than 4,000 absentee ballots remained outstanding after the Tuesday release, making Adams’ lead effectively insurmountable. The outstanding ballots featured errors that voters are allowed to fix, or “cure,” by Friday if they wish to have them counted, the board said.

Maya Wiley, Mayor de Blasio’s former counsel and the only other viable contender left in the race, was eliminated in Tuesday’s last ranked-choice round after trailing Garcia by 12,367 ballots for second place.

That means Wiley did not fare well in the absentee returns, as she was behind Garcia by less than 400 votes when only considering in-person ballots.

Nonetheless, Wiley, the progressive standard-bearer in the race, did not concede after the absentee ballot unveiling.

Rather, Wiley — who filed court papers last week to reserve her right to request a recount — suggested she’s not done and took withering aim at the city’s Board of Elections over a vote counting error that plunged the primary into chaos last week.

“We will have more to say about the next steps shortly,” said Wiley, who earned the endorsements of Rep. Alexandria Ocasio-Cortez and other left-wing heavyweights. “Today, we simply must recommit ourselves to a reformed Board of Elections and build new confidence in how we administer voting in New York City. New York City’s voters deserve better, and the BOE must be completely remade following what can only be described as a debacle.”

Beyond the mayoral race, Brooklyn Councilman Brad Lander declared victory in the race to become the city’s next comptroller after leading his main rival, Council Speaker Corey Johnson, by more than 24,000 ballots.

“We ran a campaign rooted in the idea that we can have bold, progressive local government that delivers for its people,” said Lander, who is likely to be a thorn in Adams’ side if elected in November’s general contest. “This was the most grassroots campaign for Comptroller in NYC history — and I couldn’t be more grateful to everyone who was part of it.”

Shortly after his victory statement, Johnson conceded the race, sealing the deal for Lander, who, like Wiley, saw his campaign endorsed by progressive powerbrokers, including Massachusetts Sen. Elizabeth Warren.

One of the most lasting impressions from this election cycle was the Board of Elections’ accidental June 29 release of a since-withdrawn mayoral race tally that included 135,000 “test” ballots.

As if that error wasn’t wild enough, the BOE didn’t drop Tuesday’s results without a slight hiccup.