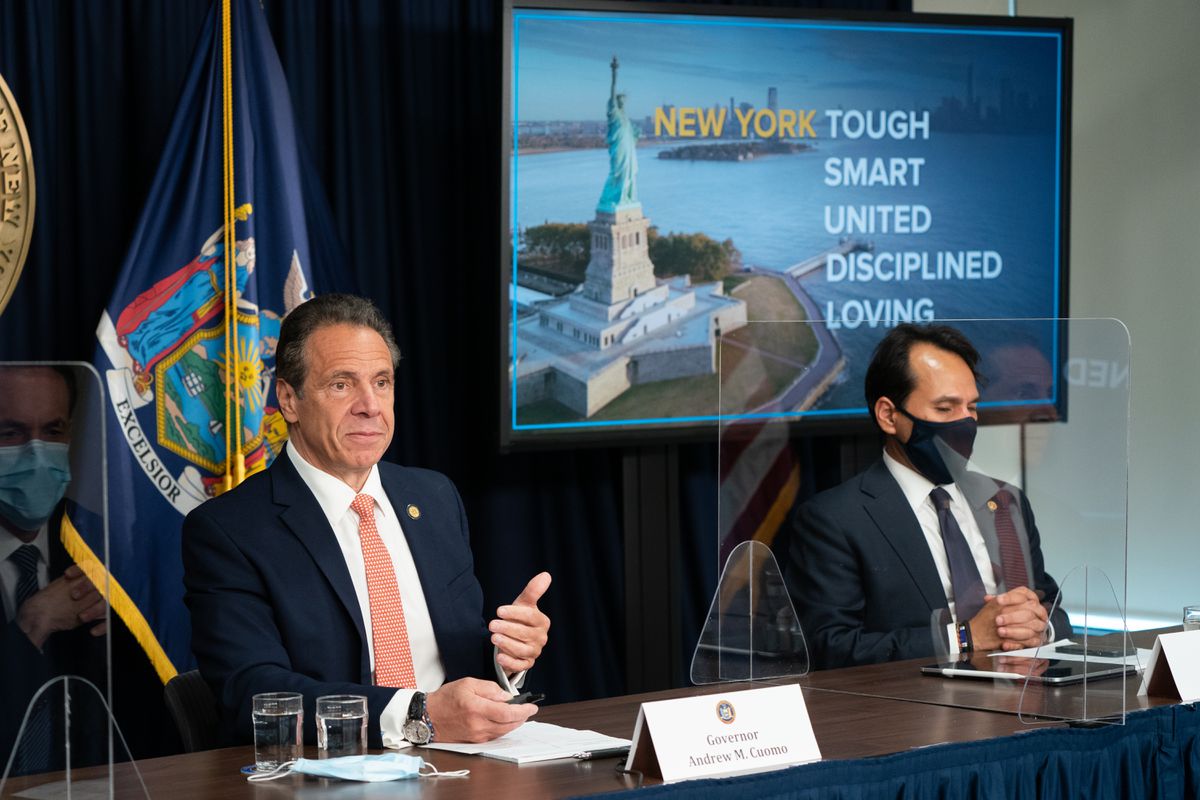 New York is turning the COVID corner and lifting capacity limits for most businesses beginning May 19, Gov. Cuomo announced Monday.

Restaurants, museums, theaters, retail stores and other businesses will be allowed to reopen at full capacity in just over two weeks time in the Empire State as well as neighboring New Jersey and Connecticut.

“It’s a measured reopening. It’s a phased reopening. But we are at a point now where we are going to take a major step forward in reopening… and it is coordinated regionally, which is smart,” Cuomo said during a press briefing from his Manhattan office.

The governor said the decision to lift the limits was based on a steady decline in coronavirus cases and hospitalizations in recent weeks.

Vaccination rates have climbed as eligibility opened up to all New Yorkers over 16 last month as well.

“New Yorkers have made tremendous progress,” Cuomo said. “It’s time to readjust the decision made on the science and on the data.”

Despite the talk of a coordinated effort, Connecticut began lifting capacity restrictions for many businesses back in March and previously set the May 19 date for full capacity. Now New York and New Jersey will follow suit.

“With our COVID-19 numbers, particularly hospitalizations, trending decisively in the right direction and our vaccination goals within reach, now is the time to take major steps to reopen our economy and loosen both indoor and outdoor gathering and capacity restrictions,” he said in a statement.

Masks must still be worn in most situations and other COVID-19 safety measures will remain in place, Cuomo said. He also offered a caveat for businesses, noting that businesses must still ensure that customers and patrons can maintain a required social distance of six feet.

Cuomo’s incremental reopening strategy, panned by restaurant and other business owners who have struggled to stay afloat, has kicked into high gear in recent weeks.

The mayor’s optimism spurred Cuomo to step in and say it was “irresponsible” to make predictions about when the city would get back to normal before saying he would like to see things reopened earlier.

The new changes announced Monday were coupled with the return of full 24-hour subway operations, ending a year-long shutdown that saw stations across the system closed to the public overnight.

The only capacity limits that will remain in place across New York and New Jersey after May 19 will be for large-scale indoor and outdoor venues and gatherings.

Large indoor and outdoor venues will go to 30% and 33% capacity and attendees at concerts and sporting events will still have to show proof of vaccination or a recent negative COVID test.

As previously announced, bars and restaurants will see the current midnight curfew lifted for outdoor dining on May 17 and closing time can go back to 4 a.m. for indoor dining at the end of the month.

Just last week, Cuomo announced that city restaurants will be able to expand to 75% capacity beginning this coming Friday, May 7.

Another 37 people died of the virus in the state.

So far, New York has administered 15.7 million doses of vaccine and seven million people are fully immunized against the deadly virus. Cuomo said the current supply is outpacing demand despite eligibility being opened up to anyone over 16.

He said the state can now focus on immunizing the “youthful and the doubtful” who have yet to get their shots.

“Anybody who can get a vaccine now can just walk in and get it. There is no barrier to a vaccine,” he said.