‘A president for all Americans’: Joe Biden wins Pennsylvania and the presidency, ousting Trump after bitter White House battle 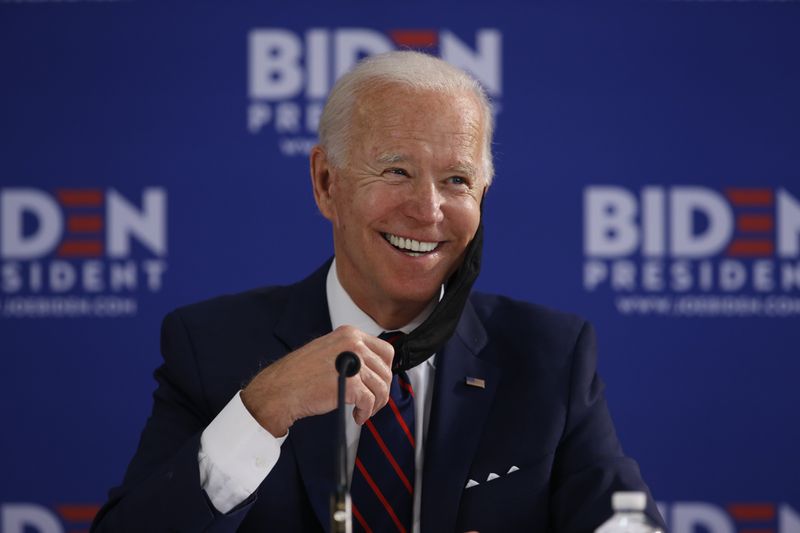 Joe Biden, finally triumphant after a contentious campaign across a deeply divided nation, was elected Saturday as the nation’s 46th president after a frantic finish that left the vanquished Donald Trump as a White House one-termer.

Biden learned he was headed to 1600 Pennsylvania Ave. at home as Trump was out playing golf, a fitting finish to a bitterly-fought race that capped the new commander-in-chief’s five-decade political career dating to his days as a Delaware city councilman. Trump offered no congratulations to the victor, instead leveling more baseless charges that he was cheated — and vowing to unleash a legal war next week.

Word that Biden cracked the magic mark of 270 electoral votes to win the presidency came Saturday morning, the last act in a heart-pounding, roller-coaster race that continued for four days after the polls closed Tuesday. The nation watched intently as votes were counted from coast to coast, with Biden picking up momentum and finally overcoming an early Trump lead.

Biden, a native of blue-collar Scranton, Pa., was put over the top by voters in his home state of Pennsylvania.

“America, I’m honored that you have chosen me to lead our great country,” said Biden after his victory. “The work ahead of us will be hard, but I promise you this: I will be a President for all Americans — whether you voted for me or not. I will keep the faith that you have placed in me.”

Biden, after collecting an all-time U.S. presidential race high of nearly 75 million votes, spent Saturday morning with family and advisers at home in Wilmington, Del., in advance of a speech to the nation.

His running mate Kamala Harris will become the first woman and the first Black and South Asian to serve as vice president with the winning ticket’s inauguration on Jan. 20, 2021. The Democratic duo’s victory set off impromptu street celebrations in Chicago, Philadelphia, Los Angeles, New York, Chicago and outside the White House in Washington, D.C.

In the year when COVID-19 killed 237,000 Americans and infected nearly 10 million more — including Trump, his wife and their son — the president’s hopes were scuttled by the millions of pandemic mail-in votes as the overall voter turnout hit a record high of more than 145 million ballots.

As the count dragged on, Biden seized late leads from the president in several battleground states, including Pennsylvania and Georgia, as the massive mail votes backing the Democratic challenger were painstakingly totaled from coast to coast.

The president, despite the undeniable national numbers bearing witness to his defeat, immediately issued a statement insisting the race was “far from over” after becoming just the 10th sitting president to lose his re-election bid.

“Beginning Monday, our campaign will start prosecuting our case in court to ensure election law are fully upheld and the rightful winner is seated,” said Trump, who has still yet to offer a single valid example of widespread voter fraud. “The American People are entitled to an honest election: that means counting all legal ballots, and not counting any illegal ballots.

“So what is Biden hiding? I will not rest until the American people have the honest vote count they deserve.”

Trump, just prior to Biden’s victory, offered a last-gasp tweet about his failed campaign: “I WON THIS ELECTION, BY A LOT!”

Deputy White House Press Secretary Judd Deere, asked if the president intended to call and congratulate Biden, said there were “no scheduling updates at this time” for the rest of Trump’s day.

1 thought on “‘A president for all Americans’: Joe Biden wins Pennsylvania and the presidency, ousting Trump after bitter White House battle”