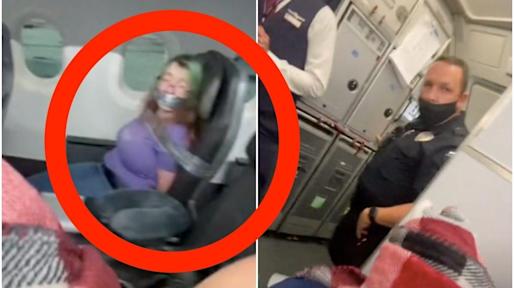 A woman who allegedly had a meltdown midflight and tried to open an airplane door was duct-taped to her seat, to the consternation of passengers who saw her as they exited the craft.

It happened on an American Airlines flight Friday, TMZ reported.

“While in flight from Dallas-Fort Worth (DFW) to Charlotte (CLT) on July 6, the crew on board American Airlines flight 1774 reported a potential security concern after a customer attempted to open the forward boarding door and physically assaulted, bit and caused injury to a flight attendant,” American Airlines told TMZ. “For the safety and security of other customers and our crew, the individual was restrained until the flight landed at CLT and could be met by law enforcement and emergency personnel.”

While American didn’t specify the type of restraint used, at least one passenger snared some video of a woman duct-taped to a seat, and posted it on TikTok.

The video, since made inaccessible, showed an unidentified woman in a first-class seat with duct tape around her chest and mouth, Business Insider reported. She was apparently attempting to scream at departing passengers.

The video poster, TikTokker @lol.ariee, said the fracas began about halfway through the two-hour flight.

“All flight attendants were running up and down the aisles, frantically kind of like whispering to each other,” she wrote, according to Insider.

Crew were locking bathroom and grabbing bags from the overhead bins but didn’t clue passengers in, she said.

As the plane touched down, a flight attendant explained that a woman had had an apparent mental breakdown and had attempted to leave the plane.

Taken to a hospital upon landing, she is now on American Airlines’ no-fly list, Insider said.