Waitress asks restaurant patrons to wear mask, they write the word ‘mask’ where tip should be 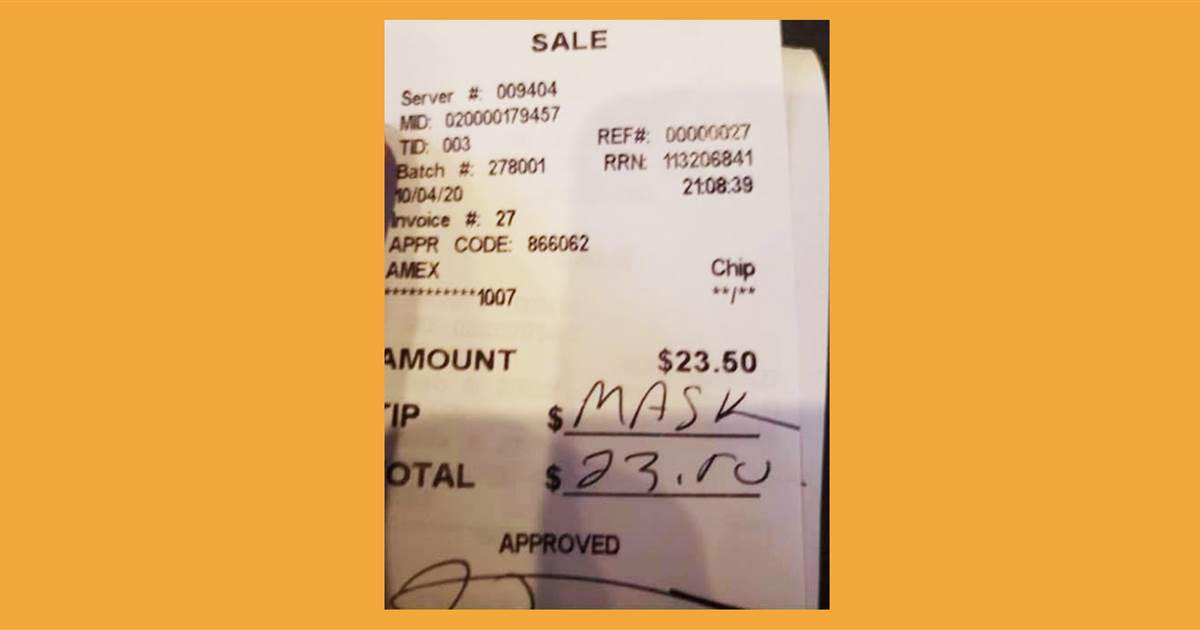 No tip for you!

And no mask, either.

After Jamie Ledwith, a server at John Henry’s Pub in Ardmore, Penn., asked a customer to don a mask – despite an ample number of signs bearing the same request adorning the walls – she was surprised to find the word “mask” scrawled in the spot on the check where the tip amount would normally go.

“When I said, ‘Can you please put your mask on if you’re walking through the bar,’ they were kind of like, they brushed it off their shoulder and they said, ‘Well, you know it’s no big deal, we’re going to sit down anyway,’ ” Ledwith told WCAU-TV.

The customer ate $23.50 worth of food but decided to make a statement instead of express gratitude for Ledwith’s work.

“I couldn’t even tell you how much I don’t care about the money,” Ledwith told the news station.

It was more about the disrespect, she said.

Studies have shown that covering one’s nose and mouth greatly reduces the transmission of the virus, which is especially important for people who are asymptomatic and thus not staying home sick.

The pub’s strict policy is for customers to wear a mask when they’re not at their table, owner Kathy Kearney told NBC News on Thursday.

The establishment also requests customers’ name and contact information on a sign-in sheet in case it’s needed for contact tracing, Philadelphia magazine reported. It’s all in the name of keeping people healthy.

For Ledwith, anyway, the story has a happy ending. Customers have been sending the single mother tips in cards slipped under the door, in pledges to tip 40% next time they eat at Ardmore, and via offers by Venmo.

“It’s been overwhelming,” Ledwith told Philadelphia. “It’s really hard working during COVID. It’s hard to tell people what to do. You try to be nice, but sometimes people are rude and disrespectful anyway. I’m just glad that 99% of them are awesome.”