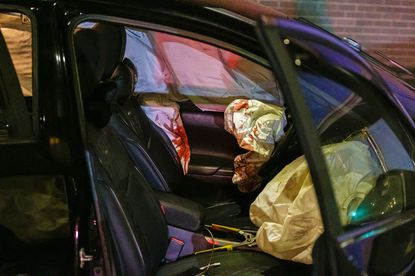 Robbery motivated a pair of scooter-riding crooks who stabbed two men in a car during a wild, caught-on-video confrontation in Queens, the victims told the Daily News.

Steven Cortez, 20, and his nephew, George Cortez, 18, were heading home from the family’s bodega in Steinway when the suspects stabbed them through an open car window, Steven Cortez said.

“They saw me counting money when I was getting off of work at my family’s bodega,” he said. “They followed us all the way from Steinway.”

George Cortez was driving, and two more people — a 19-year-old woman and a 15-year-old boy — were also passengers when the crooks struck on 30th Road and 23rd St. in Astoria at about 8 p.m. Wednesday.

“They didn’t say anything. They just started stabbing us. We were like, ‘Stop! Stop!’ But they kept going. They stabbed my nephew in the chest and under his ribs. He’s still recovering,” Steven Cortez said.

Video shows two men jabbing into the window on the driver’s side of the vehicle. The victims’ Nissan made a quick, wide left turn to escape the men, then sideswiped a building as it rolled down a sidewalk.

“I just tried to get away,” George Cortez explained, “and boom, I hit the wall.”

The two suspects then fled the scene.

The blade cut a three-inch gash under Steven Cortez’s right eye. It was patched up with stitches Thursday.

George Cortez’s left arm was plastered to his chest in a thick bandage as he recounted the assault.

Witnesses initially thought the moped riders knifed the victims in a fit of road rage after their car hit one of the bikes.

But Steven Cortez said greed, not rage, motivated the stabbing — and if the car hit one of the scooter riders, it happened as his cousin was trying to drive away from them.

“It’s messed up. I can’t talk about it. My mind is still going through it,” he said. “I just want people to know the truth.”