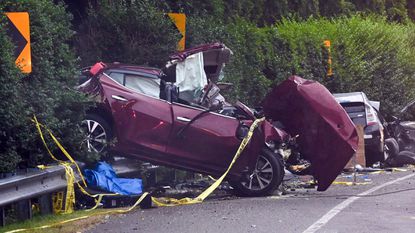 A group of friends on their way out dancing were killed on a Long Island highway — along with their Uber driver — when a speeding motorist traveling in the opposite direction veered into their lane and hit them head-on, police and relatives said Monday.

Dead were all but one of Zahid’s passengers. Mendez, 22, of Brookhaven, who was alone in his car when he veered into oncoming traffic, also died.

Uber passenger Brianna Maglio, 22, of Garden City, was the sole survivor of the crash. Her boyfriend, Ryan Kiess, 25, of Manhasset, perished along with brothers Michael Farrell, 20, and James Farrell, 25, of Manhasset. The brothers were high school and college lacrosse standouts.

It was lacrosse that tied them all together. Kiess and the older Farrell had been teammates in high school. Kiess went on to play at the University of Scranton, where he met Maglio, another lacrosse player.

Maglio is a nurse at New York-Presbyterian Hospital in Manhattan. Kiess had recently been promoted at the accounting firm KPMG.

“Ryan and Bri dated the past six years and were the cutest couple you ever saw,” said Kiess’ father, Kurt. “Five-foot tall Bri and 6-foot-3 Ryan, they were just fun loving people, would help anybody. Saturday night we were just having a party at our house. They helped clean up and left to go dancing and our lives were changed forever.”

The group responsibly called for an Uber in case they decided to drink while they were out. They never got to make the ride back.

Kurt Kiess said he and other residents have been saying for years that the roads in that area need to be improved.

“I really do think those communities out east need to examine their driving conditions on Montauk Highway, a road that was designed 70 years ago with totally different traffic flows today,” Kiess said.

“They should be invested in for their safety. This tragic event should cause everyone to think about what we can all do to make the road safer for our children. I understand a guy crossing the centerline may not be controllable, but a bend in the road can be controllable. These communities need to understand it’s not their little farm town anymore. There are thousands of people driving those roads.”

Kiess said even in the midst of their grief the families have been supportive of the lone survivor.

“I’m at the hospital and we are praying for Bri,” Kiess said. “Bri is like our third daughter. We love her and we need her to get better. She’s in ICU and it’s very serious. People don’t know what they can do for us. Well, they can pray for Bri. She’s still in ICU and she hasn’t woken up. I kissed her this morning. I’ll kiss her this afternoon.”

Quogue police along with New York State Police and area police departments are investigating the crash. Officials said speed was likely a factor.

An Uber representative said Zahid had been driving for the company for about two years. He lived in Bay Shore.

“Our thoughts are with the families of Mr. Zahid and the four others who lost their lives in this heartbreaking crash and we hope the survivor makes a full recovery,” the company said in a statement.

Kiess said his son and his friends died despite being responsible.

“They were good kids, they did everything right,” Kiess said. “They were kind people. They were caring. They loved each other. They had the whole world in front of them. You would look at a couple like Ryan and Bri and think they would be a great family. That’s what was taken away from us.

“We love our children as much as anyone loves their own child. Hug your kid because you never know. My son walked out the living room door at 10:30. I gave him a high five and said, ‘Have fun.’ My wife hugged all the kids and said, ‘Have fun. Be safe.’ That didn’t happen.”