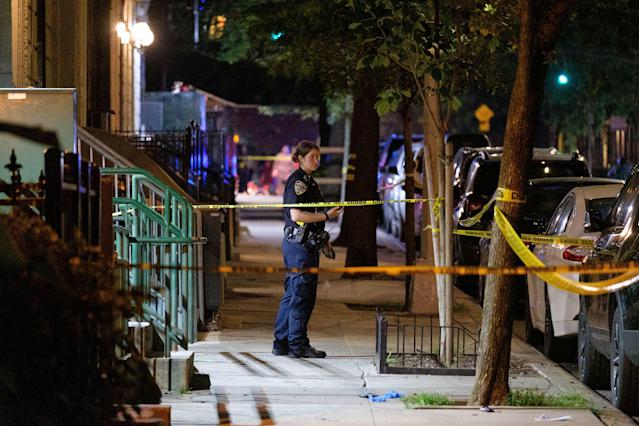 A gunman opened fire on an Upper West Side street Monday night, hitting two men, one of them an elderly bystander sitting outside a barbershop, witnesses and police said.

The shooter stepped out of a black sedan on W. 105th St. near Columbus Ave. about 6:30 p.m. and started talking with a 45-year-old man on the block, witnesses said. The assailant then pulled out a gun and shot the man in the stomach.

One stray bullet struck an 81-year-old man in the foot outside the Maria Beauty Salon, a barbershop on Columbus Ave.

“They were talking out in the street, not arguing. There were three shots,” said Alex Jallow, 52, of the Bronx, The 45-year-old victim ran north on Columbus Ave., then east onto 105th St. before collapsing.

“He was running down the street bleeding, holding his abdomen. He fell there, between those two cars,” said another witness, Michael, 54, a retired Sanitation Department worker who lives on 105th St.

Jallow, who manages a store on Columbus Ave., knew the bystander as Pedro, and said he was a neighborhood regular.

“Pedro was just sitting there in front of the barber shop. He got shot in the foot,” Jallow said. “Pedro spends all day there. He’s an old man who just talks to his friends.”

The gunman “jumped into the black car and zoomed off down 105th St.,” Jallow said.

Medics took both victims to Mount Sinai Morningside Hospital, cops said. Both were expected to survive their injuries.

The gunfire also blasted the windows of another business on Columbus Ave., Linda Nail Salon.

Police were looking for the gunman Monday night.