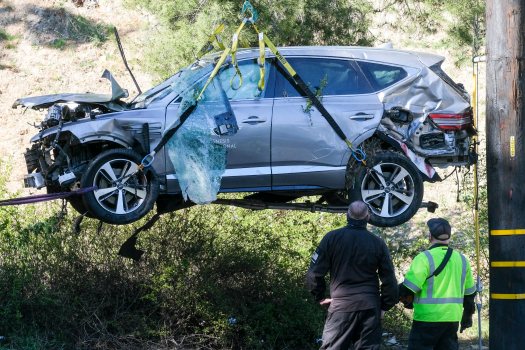 Woods, 45, was conscious but still trapped in the badly mangled 2021 Genesis SUV, wearing his seat belt, when the first sheriff’s deputy made it to the scene shortly after 7 a.m.

“I made contact with him and ensured that he was able to speak to me. At that time he seemed as though he was still calm and lucid,” Los Angeles County Sheriff’s Deputy Carlos Gonzalez said at an afternoon press conference.

“I asked him what his name was, he told me his name was Tiger. At that moment I immediately recognized him. I asked him if he knew where he was, what time of day, just to make sure he was oriented. He seemed as though he was lucid,” Gonzalez said.

“He didn’t seem concerned about his injuries at the time, which is not uncommon in traffic collisions. Many times people tend to be in shock,” he said.

Once Los Angeles County Fire officials extricated Woods from the vehicle using an ax and hooligan tool to remove the windshield, the extent of Woods’ injuries became more apparent.

“Unfortunately, Mr. Woods was not able to stand under his own power,” Gonzalez said, explaining paramedics placed the golfer on a backboard.

“It was my understanding he had serious injuries to both legs,” Los Angeles County Fire Chief Daryl Osby told reporters, adding that Woods also was fitted with a cervical collar before he was taken to Harbor-UCLA Medical Center.

The Los Angeles Times, citing an unnamed source, said Woods suffered a shattered ankle and two leg fractures, one of which was compound.

“He is currently in surgery and we thank you for your privacy and support,” Woods’ manager Mark Steinberg said in a statement Tuesday afternoon.

Woods was the lone occupant in the vehicle when it rolled over in the Rolling Hills Estates and Ranchos Palos Verdes area of Los Angeles County, the sheriff’s department said.

Sheriff Alex Villanueva said speed appeared to be a factor, but a full investigation was needed to make a final determination.

He said the vehicle hit a center divider, “crossed into the opposing lane of traffic, hit the curb, hit a tree and there were several rollovers during that process” before the vehicle finally came to a rest “several hundred feet away.”

“Obviously that indicates they were going at a relatively greater speed than normal,” Villanueva told reporters. “However, because it is downhill, it slopes and it also curves, that area has a high frequency of accidents.”

He said there was no evidence of “skid marks” or “braking.”

Asked if Woods may have been under the influence, Villanueva said the investigation was still in the preliminary stages but inebriation didn’t appear to be a factor.

Images from the scene showed the severely damaged SUV resting on its side in a wooded area near the roadway with its air bags deployed.

“We have been made aware of Tiger Woods’ car accident today,” PGA Tour commissioner Jay Monahan said in a statement. “We are awaiting further information when he comes out of surgery. On behalf of the PGA Tour and our players, Tiger is in our prayers and will have our full support as he recovers.”

The crash occurred a day after Woods attended the Rolling Hills Country Club with retired NBA star Dwyane Wade, who shared photos from the outing to Instagram Tuesday.

According to TMZ, a crew member for the TV show “Grown-ish” witnessed Woods get “agitated and impatient” as he tried to leave a hotel shortly before the crash and was blocked by someone in another car loading luggage.

Once the delay was over, Woods “took off fast,” the witness reportedly said.

Another crew member told TMZ when the show’s director arrived at the hotel, he told staff Woods almost collided with his car at high speed.

Woods underwent his fifth back surgery in December and had been unsure if he would be able to play at the 2021 Masters Tournament in April.

“I’m feeling fine,” Woods said Sunday on CBS. “I’m a little bit stiff. I have one more MRI scheduled so that we’ll see if the annulus (fibrosus) is scarred over finally and see if I can start doing more activities. But still in the gym, still doing the mundane stuff that you have to do for rehab, the little things before I can start gravitating towards something a little more.”

He last competed in a golf tournament on Dec. 20.

Woods’ most recent victory at a major tournament came in 2019, when he won The Masters for the first time in over a decade.

Born Eldrick Woods, the golfer has won 15 major championships during his prolific PGA Tour career, which is second only to Jack Nicklaus, who won 18.

“Barbara and I just heard about Tiger’s accident, and like everyone else, we are deeply concerned,” Nicklaus tweeted about himself and his wife. “We want to offer him our heartfelt support and prayers at this difficult time. Please join us in wishing Tiger a successful surgery and all the best for a full recovery.”

Woods was arrested and charged with DUI in Florida in May 2017 after police found him asleep in his running car, with the athlete attributing the incident to him taking sleep medication.

He pleaded guilty to reckless driving the following October.

Members of the sports world shared their support and concern for Woods following the accident.

“I’m sick to my stomach,” fellow golfer Justin Thomas said during a press conference. “It hurts to see one of my closest friends get in an accident. I just hope he’s all right. Just worried for his kids.”

“Tiger Woods is part of the Augusta National family, and the news of his accident is upsetting to all of us,” Augusta National Chairman Fred Ridley said in a statement. “We pray for him, for his full recovery and for his family during this difficult time.”

Others shared sentiments on social media, with Cleveland Browns quarterback Baker Mayfield tweeting, “Prayers up for @TigerWoods,” and New England Patriots wide receiver Julian Edelman writing, “Thinking of @TigerWoods this afternoon… prayers this is just the beginning of another major comeback.”