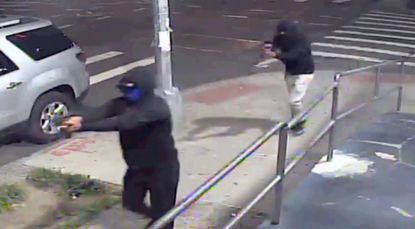 The coordinated shooting that left 10 people wounded Saturday in Queens was the bloody result of a bitter, years-long feud between two notorious city gangs ― the latest in a string of retaliation shootings sparked by a murder last month, police sources told the Daily News.

The gunplay marked the latest skirmish in the war between Queens-based ABK, or “Always Banging Kings,” and the Trinitarios, who are largely based in the Bronx. The mass shooting has been linked to the July 18 murder of Aldair Melchor, 25, who was shot dead on 132nd St. and 32nd Ave. in Flushing by a gunman in a black car, sources said. Since then, two more shootings have been tied to the gang war, sources said.

As cops continue to hunt for the shooters, Mayor de Blasio on Monday signaled that New Yorkers could “hear a lot more about gang takedowns” later this week.

“There are going to be more gang takedowns, more gun arrests, more cooperation with community,” he said. “Gangs are the problem, and this is where the focus is going to be.”

Saturday’s bloodshed began when a pair of ABK gunmen walked up on three Trinitarios members outside a barber shop at 37th Ave. near 97th St. in North Corona and started spraying bullets. The barber shop is believed to be a gang hideout, sources said.

The shooters hopped onto the backs of scooters driven by accomplices, leaving their three rivals and seven innocent bystanders wounded as they sped off.

The victims included a 72-year-old woman and people celebrating a birthday in a nearby restaurant. All 10 victims survived.

Raphael Torres, 50, was shot in the leg and a cop used a belt to slow the bleeding. He was released from the hospital Monday morning.

“When the cops arrived, I told them ‘hurry hurry, call an ambulance’ because I was bleeding a lot,” Torres said. “That’s when [the officer] used a belt and some paper towels to stop the bleeding.”

Torres said he was hanging with some buddies outside a bodega next to the barber shop and had gone inside to pay for a sandwich when the gunfire exploded.

Cops have released video of the gunmen, but no one has been arrested yet.

The Trinitarios, a largely Dominican gang, is based in the Bronx, but runs drugs into every borough in the city, according to filings by federal prosecutors. Members take an oath and follow a set of rules that come from a handbook given to initiates.

The gang hands out punishment to members who don’t follow orders to battle rival gangs, according to the feds.

Several Trinitarios were arrested for the June 20, 2018 machete murder of 15-year-old Lesandro “Junior” Guzman-Feliz ― a brutal, caught-on-video killing that shocked the city.

Lesandro was mistaken for a rival gang member and chased into a bodega in the Belmont section of the Bronx. Mortally wounded, he staggered outside and collapsed a few yards from the entrance to St. Barnabas Hospital.