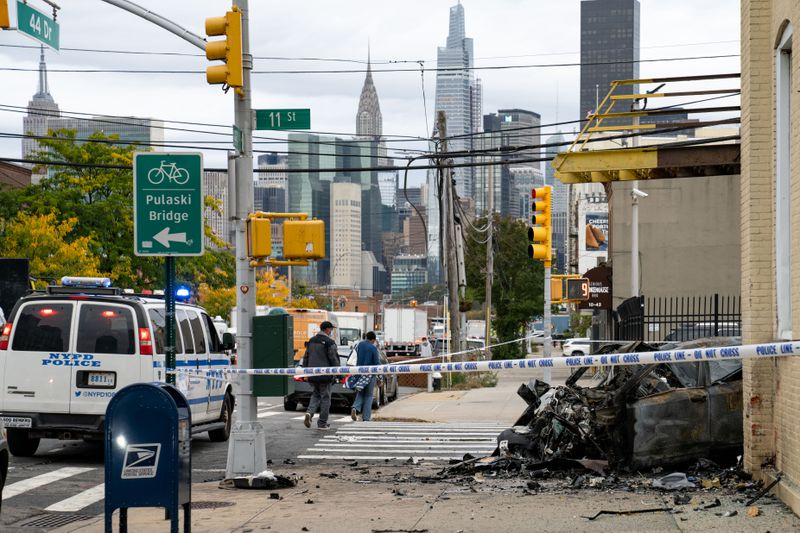 A church-going nurse died beneath her burning SUV in a fiery Queens wreck, after the runaway vehicle hopped a curb and slammed into a building, ejecting the woman from her seat, police said.

Neighbors believe Beverlee Jackson, 58, was heading home from her night shift at a Queens hospital Thursday when she lost control of her speeding car at 11th St. and 44th Drive in Hunter’s Point shortly before midnight.

Jackson, after she was thrown from the Honda CRV, became pinned halfway underneath the vehicle as the SUV spun around and burst into flames, police said.

She was pronounced dead with severe body trauma at the scene, roughly eight miles from her Brooklyn home, cops said.

The charred car, with its front end demolished, remained on the sidewalk hours later as the investigation continued.[More New York] Man, 26, shot dead in Paterson, N.J. »

“She worked in a hospital in Jamaica,” said the landlord at the victim’s East Flatbush apartment building. “She worked at one of the hospitals with the most COVID … She was a kind, sweet lady. She was a church lady. She was a very, very nice lady. I was shocked.”

The landlord said Jackson, the mother of an adult daughter who came to visit most days, usually worked a shift starting at 3 p.m. and typically arrived home between midnight and 1 a.m.

Another building resident echoed the landlord’s description of Jackson as a dedicated worker on the front lines of the pandemic.

“She worked a lot of overtime — always working,” said a 40-year-old neighbor named Rockwell. “Hard-working. That could have been tiredness when she lost control of the car. That’s sad.”